Sanju Samson, in another brilliant display of athleticism, got Murali Vijay run out for 37 off 32.

Rajasthan won by 26 runs
Man of the Match: James Faulkner

Sanju Samson, in another brilliant display of athleticism, got Murali Vijay run out putting Kings XI Punjab (KXIP) in trouble in their chase of 163. Rajasthan Royals (RR) will feel very confident from here as Vijay was scoring quite freely and was looking set for a bigger score. Kings XI Punjab vs Rajasthan Royals Live Cricket Score IPL 2015: Match 3 at Pune

Samson earlier even got Wriddhiman Saha run out with an accurate throw at the stumps. His effort against Vijay was just as fabulous. KXIP will now rest their hopes on Akshar Patel and the new man at the crease, which is David Miller. RR will be aware of the dangers Miller poses to their chances of sealing victory. Live Cricket Updates: Kings XI Punjab vs Rajasthan Royals in IPL 2015

In the first innings, RR put 162 runs on the board, thanks to a stellar show from James Faulkner with the bat who rescued the Rajasthan Royals from a difficult spot, scoring 46 off 33 balls. They were 75 for five at one stage — similar to what KXIP find themselves in now. 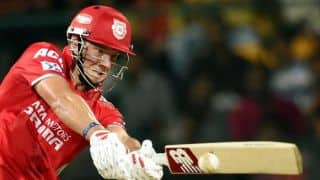