Vijay had scored 56 and 100 on County debut, against Nottinghamshire. This is his second match.

Murali Vijay was axed from the Indian Test side after registering a pair in the second Test of the recently concluded series against England, at Lord’s. He signed up a contract with Essex subsequently, and started his season with 56 and 100 against Nottinghamshire, at Trent Bridge to help Essex ease to an eight-wicket victory. Vijay has now registered his third fifty in as many innings in the ongoing County Championship (his first three in the history of the tournament), at Chelmsford against Worcestershire.

Vijay batted at a brisk pace, requiring only 78 balls to bring up his fifty. He hit nine fours and a six, including a four and a six off consecutive balls of left-arm spinner Ben Twohig to race from 39 to 49. Some of his shots were exquisite.

Earlier in the day, Worcestershire were shot out for 94 in under 26 overs after Daryl Mitchell opted to bat. Jamie Porter, who seemed to make it to the England squad throughout the India series but never made it to the XI, led the rout with 7 for 41. In fact, Porter took five out of the top six wickets and ran out No. 3 Olly Westbury, reducing the tourists to 32 for 6. Five of Porter’s wickets were without the help of a fielder. Joe Clarke (28) top-scored for Worcestershire while Wayne Parnell had a blast towards the end.

Parnell bowled Nick Browne early when Essex batted, but Vijay (50*) and Tom Westley (29*) have pushed Essex towards a lead since then. 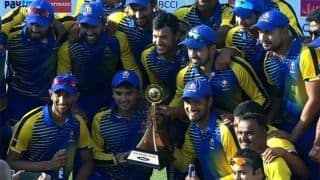