AB de Villiers and Muttiah Muralitharan starred with the bat and ball respectively as Royal Challengers Bangalore posted a 20-run victory over Delhi Daredevils to start their campaign in the fifth edition of Indian Premier League on a winning note on Saturday. 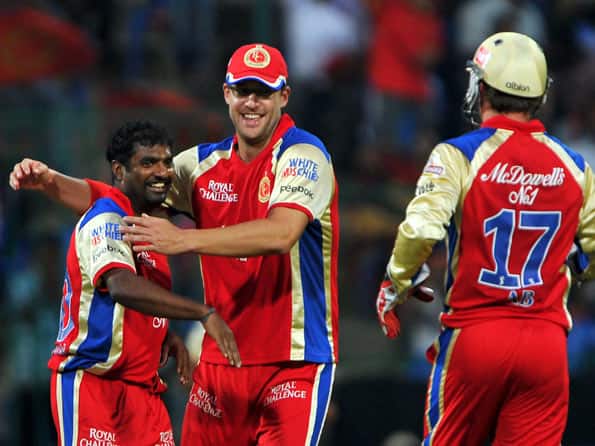 AB de Villiers and Muttiah Muralitharan starred with the bat and ball respectively as Royal Challengers Bangalore posted a 20-run victory over Delhi Daredevils to start their campaign in the fifth edition of Indian Premier League on a winning note on Saturday.

Chasing 158 for victory, the Daredevils were restricted to 137 for seven by last year’s runners-up who were served well by Muralitharan’s three for 25, after De Villiers set it up with a blazing 64 off 42 balls.

De Villiers hit six fours and two sixes in an innings that gave Bangalore the platform.

The start of Daredevils’ innings was nothing less than eventful at the Chinnaswamy Stadium.

Delhi were off to a flyer with Aaron Finch (25 off 24) hitting Zaheer Khan for three boundaries through the off-side in the very first over before skipper Virender Sehwag offered a simple catch to Cheteshwar Pujara at covers off an innocuous Zaheer delivery.

Naman Ojha (33 off 26) lofted R Vinay Kumar for a huge six over deep square-leg that went 79 metres, to accumulate 10 runs from the second over.

There was a lull after that as Zaheer and Vinay pulled things back with some tight bowling, which saw Bangalore concede no more than eight runs.

Ojha broke the shackles by flaying Zaheer past point for a much-needed boundary and then clobbered the pacer over the mid-on fielder for another four.

The run-rate slipped again after the introduction of spinners, with skipper Daniel Vettori and Muralitharan bowling well in tandem.

It didn’t take Muralitharan long to provide the hosts a breakthrough as Ojha was caught at slip by Virat Kohli.

Irfan Pathan (24 off 155) made a last-ditch attempt to turn the tide in favour of Delhi, but his effort was not enough.

Meanwhile, it was not over for Murali as he flummoxed Glenn Maxwell with a top spinner, the resulting leading edge going to Zaheer at short fine-leg. Venugopal Rao tried to put up a fight before being done in by Andrew McDonald for 18 off 23 balls.

Earlier, De Villiers rescued Bangalore’s innings with an unbeaten half century as they posted 157 for seven.

With the explosive Chris Gayle sitting out due to fitness issues, RCB badly needed the current toast of Indian cricket, Virat Kohli, to fire.

But the Delhiite flopped and RCB failed to get a single steady partnership, barring a 54-run stand down the order between de Villiers (64 not out) and R Vinay Kumar (18).

Opener Andrew McDonald (30) also made a valuable contribution up the order.

McDonald gave RCB a flying start but his dismissal triggered a parade back to the pavillion by RCB batsmen, with Glenn Maxwell being the most successful Delhi bowler. He grabbed three wickets and conceded 32 runs in his four overs.

Morne Morkel also chipped in with a couple of wickets for Delhi.

De Villiers rescued RCB’s innings after the hosts were five down with 85 runs on the board.

Had it not been for the South African swashbuckler, RCB could have been deep trouble as talismanic skipper Daniel Vettori was run out after contributing just three runs to the total.

Delhi’s star bowler Irfan Pathan was a massive flop as he conceded 47 runs — 23 of them in his first spell of two overs, punished by both McDonald and de Villiers.

Umesh Yadav was the most economical Delhi bowler but went wicketless in his two overs that cost just eight runs.