Currently, Bangladesh are 152 for the loss of six wickets in 36 overs with Sabbir Rahman on 22.

Bangladesh batsman, Mushfiqur Rahim was dismissed for 27 by fast-bowler, Umesh Yadav after being caught by MS Dhoni in a high catch, against defending champions, India, in the 2nd quarter-final of the ICC Cricket World Cup 2015 at the Melbourne Cricket Ground (MCG) in Melbourne on Thursday. Currently, Bangladesh are 152 for the loss of six wickets in 36 overs with Sabbir Rahman on 22 and Nasir Hossain on five. Live Cricket Updates and Commentary: India vs Bangladesh, ICC Cricket World Cup 2015 Quarter-final 2 at Melbourne 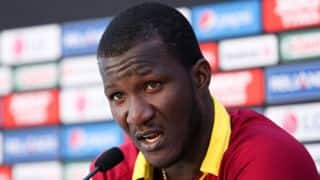