It was a beautiful sunny afternoon at Manuka Oval at Canberra and this Asian derby has produced a full house at the venue.

Thanks to couple of blistering knocks by two experienced Bangladeshi batsmen Shakib-al-Hasan and Mushfiqur Rahim have helped Bangladesh to post a competitive 267 in their allotted 50 overs against the World Cup debutant Afghanistan at Canberra. Both teams are playing their opening game of this edition of ICC Cricket World Cup. Live Scorecard: Bangladesh vs Afghanistan

It was a beautiful sunny afternoon at Manuka Oval at Canberra and this Asian derby has produced a full house at the venue. This day is also very special for Afghanistan Cricket, as the war-trodden nation became the latest team to play in the World Cup. However Bangladesh skipper Mashrafe Mortaza won an important toss and decided to bat first in this day night encounter as chasing under lights wont be easy on these conditions. Live Updates: Bangladesh vs Afghanistan

It was the medium pacer Mirwais Ashraf who got the wickets of both openers. At 52 for two, young Soumya Sarkar, who is playing his second ODI took control of the innings along with Mahmudullah. For the third wicket, both formed half-century partnership. Bangladesh was looking good at that time. ICC Cricket World Cup 2015: SCHEDULE & MATCH DETAILS

The game again swung in favour of Afghanistan when Shapoor took two wickets in his seconds spell. Both Sarkar and Mahmudullah got out to the lanky left-arm pacer. From 102 for two, Bangladesh were suddenly restricted to 119 for four. One more wicket at that time would have helped Afghanistan to restrict the Bangladeshi boys under 200. What an achievement it would have been,

But thankfully for Bangladesh that did not happen. From that alarming situation, Shakib and Mushfiqur got together and use their experience to good effect. The right-left combination also helped. The partnership scored valuable 108 runs and its because of that particular partnership Bangladesh went past 250.

Afghanistan bowlers bowled really well at the death overs. Especially Hamid and Aftab Alam bowled some excellent yorkers. Because of their spirited bowling efforts, Bangladesh failed to go past 275-run mark, which was looking very much possible at one point of time. 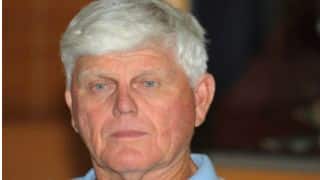