Pakistan’s former ace all-rounder, Mushtaq Mohammad reminisced about how he took a great level of interest in Sachin Tendulkar’s fledgling career and even prayed for his success after Sunil Gavaskar opined that he should watch out for the boy wonder. Gavaskar expected him to be 'a wonder of the world’ in the days to come. Pakistan’s former ace all-rounder, Mushtaq Mohammad reminisced about how he took a great level of interest in Sachin Tendulkar’s fledgling career and even prayed for his success after Sunil Gavaskar opined that he should watch out for the boy wonder. Gavaskar expected him to be ‘a wonder of the world’ in the days to come.

Speaking about the keen interest he developed in Tendulkar’s career since Gavaskar’s endorsement before India’s tour of Pakistan in 1989-1990, Mushtaq Mohammed said, “From that moment on, I took a special interest in Sachin Tendulkar as I was once regarded a child prodigy having made my Test debut at 15. And because of that connection between us, I have followed his career with great interest over the years and have even prayed for the lad at times. I always wanted him to do well.”

“But back in ’89, I was especially curious to take a look at the young boy after Sunil’s endorsement as I wanted to compare him to myself at that age and another child prodigy who was my protege, Javed Miandad. And after seeing him in that series and then on the England tour in 1990, I concluded that Sachin was the best child cricketer I had seen and knew he was going to have a big career. The way he handled himself against Wasim Akram, Imran Khan, a young Waqar Younis and the brilliant Abdul Qadir was very impressive. Pakistan had one of the best bowling attacks around yet his technique was and always has been immaculate.” Mushtaq Mohammed was quoted as saying by Mid DAY.

“I met him properly for the first time on the 1990 tour of England when India played a warm-up match at Smethwick (near Birmingham). He was very likeable and asked me to help him fix his bat that had become too whippy. I was amazed how heavy that bat was, for such a small boy!” he recalls.

“Now he is preparing for his 200th Test, I congratulate him on a remarkable achievement and I am pleased he is retiring on his own terms rather than wait for the tap on the shoulder.” he stated.

On the never ending debate on who is the better one between Tendulkar and West Indies great Brian Lara, Mushtaq Mohammad said, “People have asked me many times over the years who I rate the best out of Sachin and Brian Lara and it’s a question that is not easily answered. Each have their own merits. Sachin obviously has many records to his credit and his longevity has been sensational, though Lara has maybe won more matches for his team while playing in an inferior batting line-up. Sachin would maybe rue the fact he never scored a Test triple century, as he’s had the talent to do it, though he has two more Tests! But overall he has so much to be proud of.”

He also said, “Garfield Sobers remains the best cricketer I have ever seen but I thank God that he has kept me alive long enough to witness the 25-year career of Sachin Tendulkar.”

Mushtaq Mohammad has played international cricket for more than a decade from 1959 to 1970. He also went onto captain Pakistan to a famous Test series victory against India during the 1978-1979 season. 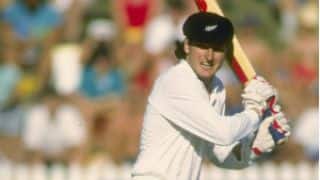 Ken Rutherford: A less than remarkable New Zealand batsman who went on to lead his country