Fans openly wept and an effigy of umpire Aleem Dar, who is from rival nation Pakistan, was burnt in the street.

Dhaka: Mustafa Kamal resigned as president of the International Cricket Council (ICC) on Wednesday, saying he had been prevented from presenting the ICC Cricket World Cup 2015 trophy after claiming one of the matches was fixed. Kamal’s position has been largely ceremonial since N Srinivasan took office as ICC chairman last year.

On Wednesday, Kamal launched an extraordinary attack on the Indian national, calling him “rotten” and “controversial” and suggesting the ICC could stand for “Indian Cricket Council”.

“I feel bad even to mention his name,” he said. “If that man is in charge of cricket, how will cricket run?” Kamal, who is a government minister in Bangladesh, had earlier threatened to quit over the umpiring of the quarter final. He said he had been told he would only be allowed to present the trophy if we withdrew his claim of bias.

Last month’s match was the first time Bangladesh had reached the World Cup quarter-finals and emotions in the cricket-mad country ran high after their 109-run defeat by India.

Fans openly wept and an effigy of umpire Aleem Dar, who is from rival nation Pakistan, was burnt in the street. Kamal said he had told ICC bosses it would be “unconstitutional” to allow anyone else to hand over the trophy. 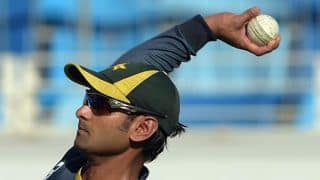 Mohammad Hafeez to undergo reassessment test on his bowling action