This is Bangladesh's first T20I series win over West Indies, and second overall after they beat Ireland 3-0 in 2012.

Bangladesh have beaten West Indies by 19 runs (DLS) to claim the three-match Twenty20 international series 2-1, with Mustafizur Rahman starring with the ball in a rain-hit match at Lauderhill s Central Broward Regional Park on Monday.

This is Bangladesh’s first T20I series win over West Indies, and second overall after they beat Ireland 3-0 in 2012.

The win was set up by the batsmen, namely opener Liton Das who made a career-best 61 off 32 balls and Mahmudullah (32* off 20 balls), and regular blows from left-arm pacer Mustafizur ensured a total of 184/5 was out of reach for West Indies, who were deemed 19 runs behind on DLS when rain washed out proceedings at 135/7 in 17.2 overs.

The main challenge to Bangladesh s total came from Andre Russell, who hit six sixes in his 21-ball 47 as the asking rate escaped West Indies reach. Once he became Mustafizur s third wicket of the night, the game was official over.

Mustafizur, who had taken 3/50 in the last T20I as Bangladesh leveled the series 1-1, was in the thick of things again in a match-winning performance. In his first over of the game, Mustafizur removed Andre Fletcher while conceding six runs. When he returned to bowl his third over, the 14th over the West Indies innings, Mustafizur struck first ball to get Rovman Powell (23) who mistimed a pull shot and was caught. Russell, who by this stage had smacked three sixes in eight balls, hit Mustafizur for six and four in successive deliveries.

With three overs left, West Indies needed 50 runs with Russell on 47 from 20 balls. Back came Mustazifur, and immediately Russell swung a full toss down to long-off where Ariful Haque held the catch just inside the boundary. As soon as the catch was taken, rain returned to force the players off the field.

Bangladesh s total of 184/5 owed plenty to Liton, who hit three sixes and six fours in his innings of 61. The opening stand was worth 61 in just 4.4 overs, a record for the quickest fifty in T20Is off just 21 balls, before Tamim Iqbal (21 off 13) became West Indies skipper Carlos Brathwaite s first wicket. Soumya Sarkar (5) and Mushfiqur Rahim (12) also struggled, but clutch innings from Shakib Al Hasan (24), Mahmudullah (32*) and Ariful Haque (17*) got the score to 184. Mahmudullah and Ariful put on 38 for the sixth wicket.

Rain interrupted play the first time during Bangladesh s innings, with the score 149/5 in 16.3 overs. 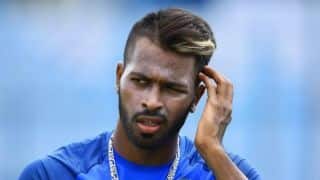