Bangladesh pace sensation Mustafizur Rahman, who plays for Sunrisers Hyderabad in the IPL 2017, says he never lets success get the better of him.

Bangladesh pace sensation Mustafizur Rahman, who is currently a part of the defending champions Sunrisers Hyderabad (SRH) in the ongoing Indian Premier League (IPL) 2017, says he never lets success get the better of him. On the other hand, Mustafizur also said that he should be remembered as ‘a good human being’. Rahman, who shot into fame in 2015 when India toured Bangladesh for a One-Day International (ODI) series, in which he claimed five-wicket hauls in two consecutive matches. It was due to his spells, which rattled the Indian batting order, allowing Bangladesh to win their maiden ODI series against the neighbours. IPL 2017: Mustafizur Rahman expects off-cutters to come handy against Kolkata Knight Riders

“I never let success get into my head. You guys keep asking me about being something big, great talent and so on… I am unfazed. If I cannot become a great cricketer, I will at least want to be remembered as a good human being,” he said in an interview with IANS. Mustafizur played a key role for Bangladesh in their ODI series at home against South Africa as well, which the hosts clinched in favour 2-1. Mustafizur featured in all matches of the series and finished with 5 wickets in 3 matches. But the series against India is his best till date, as Mustafizur claimed 13 wickets in a mere 3 matches. However, a shoulder surgery in 2016 forced him to miss out of the one-off Test against India, which resulted in a draw. On being asked if he could have played the series, he said, “I was not fit for the series.” Mashrafe Mortaza advises Mustafizur Rahman to miss IPL 2017

Mustafizur is now a key member of the Sunrisers Hyderabad bowling attack in IPL. He played a key role in SRH s title win last year. Mustafizur believes variation is a compulsory aspect of bowling in T20 cricket. “In this format of the game [T20], you need variations. Every bowler will have his stock ball. But you need to vary your deliveries in order to get success,” he added.

He also spoke on his recent performance in the tour of Sri Lanka. “I am happy with my ODI bowling [against Sri Lanka]. What I wanted was not happening and I could not get the ball in the right areas. The length was a problem too. In the last ODI, I was getting back my rhythm I thought, and T20s was fine I would say. I don’t have any target in mind. I always try to give my best and help my team win at the end of the day,” he concluded. 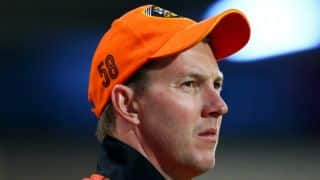