Muttiah Muralitharan is now a spin bowling coach with the Australian team.

Brad Hodge, the former Australian batsman has hailed the decision to appoint Muttiah Muralitharan as the spin bowling coach. The Sri Lankan legend will work with the Australian team and pass on his valuable inputs. Hodge believes the Australian batsmen will also benefit and learn how to play tricky spinners such as Saeed Ajmal, especially in a T20 contest.

Speaking to Big Bash League’s official website, Hodge said, “Facing someone like Ajmal in a 50-over match where he can bowl 10 overs is a completely different scenario to him bowling 24 balls to you when you have to score at a high rate. If you bat down the order and he’s just taken a wicket, and you have to keep the run rate going at nine an over but you don’t know which way the ball’s turning, you’re going to find it very difficult.”

Australia had a tough time in the ICC World T20 in Bangladesh this year where they were knocked out in the first round. Speaking about the batsmen’s failures to hit bowlers like Ajmal, Hodge said, “And I think that’s where Australia have struggled a little bit, and it’s a pro-active move by Pat Howard and his team to get Murali (Muralidaran) in. I think it’s a great idea. Murali is a superstar of the game and he’ll talk cricket until your ears bleed. He’s a legend, and I’ve got to take my hat off to the High Performance team. They’ve recognised a deficiency, and gone, ‘let’s get it fixed’.”

Hodge stated that he feels that Australia did not do well at the World T20 because the players did not have enough T20 games coming into the tournament. He highlighted the fact that majority of Australia’s squad were involved in the longer versions and could not play enough in the Big Bash League, which could have helped them prepare for the tournament. Hodge did feature in the World T20 squad and was one of the few players who could play the full season in the BBL. 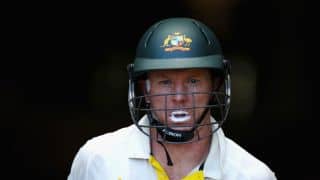