N Srinivasan, the new chairman of the International Cricket Council (ICC), admitted on Thursday the sport’s image had taken a battering after disgraced New Zealand batsman Lou Vincent was banned for life for match-mixing. Critics say Srinivasan’s appointment last week as ICC chief has itself tarnished the game as he was forced to quit as head of India’s Board of Control for Cricket in India (BCCI) over a corruption inquiry involving his son-in-law.

But in an interview with India’s NDTV network, Srinivasan reiterated that his conscience was clear while acknowledging the damage from recent revelations of match-fixing involving Vincent in five different countries.

“There have been these instances that have come to light. Naturally… any sport where it happens, there is a dent,” he said. “We are taking steps [on combating match-fixing] and I think the ICC is very pro-active on it.”

Vincent, who was handed his ban earlier this week, told on Thursday how his match-fixing boss had threatened him with a cricket bat after an attempt to rig a game backfired.

But despite the apparent scope of corruption, Srinivasan said the ICC would strive to ensure that “there is no doubt about any single game played anywhere”.

“I think that’s the responsibility that we have and steps are being taken in that direction,” he said.

Srinivasan’s ICC appointment came only weeks after he was effectively forced by the Supreme Court from his post as president of the BCCI while allegations of illegal betting and spot-fixing involving his own son-in-law Gurunath Meiyappan were probed.

Judges had called his refusal to quit of his own accord “nauseating” and the world players association FICA has said Srinivasan should not have been handed his new role until the corruption allegations surrounding the Indian Premier League (IPL) remained unresolved.

Srinivasan said he could not comment on the investigation for legal reasons but added that “to my conscience, I have not done anything that will tarnish the game, bring disrepute or done anything wrong”. 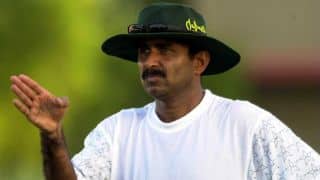