Srinivasan reportedly remains defiant and has declined to step down as the BCCI president.

Board ob Control for Cricket in India‘s (BCCI) president N Srinivasan has reportedly declined to step down from the post, despite the Supreme Court stating it strongly on Tuesday that he will have to resign from the position or a verdict will be issued in the matter.

After going through the contents of a report filed in a sealed cover by Supreme Court-appointed probe panel into the Indian Premier League (IPL) 2013 spot-fixing and betting scandal, a bench headed by Justice AK Patnaik said there are “very very serious” allegations made in the report and unless Srinivasan steps down, a fair probe cannot be conducted.

However, Srinivasan reportedly remains defiant and has declined to step down as the BCCI president.

“No one can force me out of BCCI. I have done nothing wrong,” NDTV quoted Srinivasan as saying.

Mohinder Amarnath and Bishan Singh Bedi, the former Indian cricketers on Tuesday said that Srinivasan should resign from the post and their view was supported by former BCCI administrator and Rajasthan Cricket Association President Kishore Rungta.

Srinivasan also faced heat from within the Board as BCCI vice president Shivlal Yadav said they will follow Supreme Court’s suggestion. 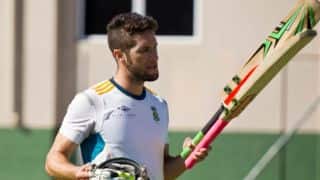