PCB Chief Zaka Ashraf says BCCI have agreed for an Indo-Pak series in a neutral venue.

The Chairman of the Pakistan Cricket Board (PCB) Zaka Ashraf has said that his Indian counterpart N Srinivasan has agreed to India playing a bilateral series with Pakistan at a neutral venue.

“Mr Srinivasan has reassured me they are serious about playing a bilateral series with us even at neutral venues of our choice, but eventually we will need some written assurances and firm guarantees that this series will happen,” Ashraf told the media in Lahore on Monday.

Ashraf termed the offer by the Board of Control for Cricket in India (BCCI) as a positive gesture,”We want to be sure that this proposed series against India will actually take place, because you have to keep in mind that India had avoided playing regular bilateral series with us in recent years,” he said.

Ashraf pointed out that, in contrast, Pakistan had gone out of its way to play against India and had toured India in 2007 and 2013 but in this period India only came to Pakistan for the Asia Cup in 2008.

The offer from the BCCI for a bilateral series at a neutral venue has come after Indian cricket board along with its Australian and England counterparts moved a draft proposal paper at the ICC, which proposes to restructure the governance model of the world body and also revise the distribution of finances and revenues among member nations.

Ashraf said that as far as relations with India were concerned, PCB would seek guarantees and written assurances from the BCCI for any future series.

He admitted that the BCCI had told Pakistan before the International Cricket Council (ICC) meeting in January that they needed to sign the draft proposal by the three boards but since then India’s stance had changed for the positive.

Ashraf also said that the PCB was in talks with the South Africa and Sri Lankan cricket boards to have regular series with them.

“With South Africa we are looking to have a regular series named the Jinnah-Mandela trophy,” he said.

Asked about the Umar Akmal road rage incident and his subsequent arrest by the police, and his time in lock up, Ashraf said the board would be inquiring into the matter to find out what actually happened and why the incident took place. 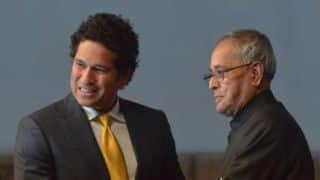