Supreme Court had asked Srinivasan to step down.

As N Srinivasan’s fate is in the hands of the Supreme Court today, there is a word going around that he may actually “step aside”. In June last year, Srinivasan had stepped aside as the probe was going on into the Indian Premier League (IPL) spot-fixing controversy. However, he had resumed his duties later.

This time, according to NDTV and some other news channels, Srinivasan has offered to step-aside, while a time-bound enquiry is performed on the IPL spot-fixing and betting controversy. However, the BCCI have also asked the court to permit Srinivasan to continue his international duties.

Earlier on March 25, the Supreme Court issued a strong observation, asking Srinivasan to step-down from the post of the BCCI president as it observed that a fair probe couldn’t have happened with him at the helm. The Supreme Court even asked him why he was sticking to his chair.

“We don’t like to damage people’s reputation but unless the BCCI President steps down, no fair investigation can be done. Why is he sticking to the chair? It is nauseating. If you would not step down, we will pass the verdict,” the Supreme Court observed. 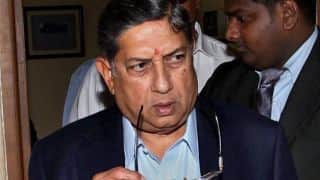