Narayanaswami Srinivasan, the controversial former president of the Board of Control for Cricket in India (BCCI) and the newly elected chairman of International Cricket Council (ICC) said that he would never stop cheering for India. N. Srinivasan has also given his views about the new looked Indian team which is currently touring England. According to him this young Indian team, led by MS Dhoni, has performed well in the past tours of South Africa and New Zealand and they were unlucky not to win those series away from home.

In an interview with NDTV, Srinivasan was talking about various aspects of Indian cricket, where he said that Indian cricket is on a right path and cricketers from every path of country are coming up in the ranks to take Indian cricket forward, latest is Parvez Rasool from Kashmir. He also said currently India’s priority is to perform well in Test cricket and that is why India will be playing more Test series like the ongoing England vs India series in future as well. Apart from that India will host ICC World T20 in 2016, ICC Champion’s Trophy in 2021  and the 2023 ICC Cricket World cup, which is good news for BCCI and Indian cricket.

When he was asked about the lack of match-winners in Indian bowling department, Srinivasan argued that India also had their match winners like Erapalli Prasanna, Bishen Singh Bedi etc. For Srinivasan, bowling spin is an art and everyone can’t become Anil Kumble overnight. One has to be consistent to be a good international spinner like Anil Kumble. Accoding to Srinivasan, current young Indian bowlers had bowl decently in recent tours, but what India was missing was some big scores from the batsmen. England vs India, 1st Test, Day 5: Session one goes to the host 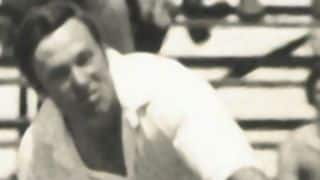