Marsh called on the ICC to take note of Supreme Court's orders and apply it for ICC activities.

The Federation of International Cricketers’ Associations (FICA) wants the under-fire N Srinivasan to stand aside from all International Cricket Council (ICC) functions after being forced out as Board of Control for Cricket in India (BCCI) President owing to the Indian Premier League (IPL) 6 betting scandal.

Srinivasan has been forced to step aside following the Supreme Court’s direction that former cricketers Sunil Gavaskar and Shivlal Yadav perform split duties as BCCI president in his place.

While Gavaskar has been made in-charge of the IPL, ex-off spinner Yadav has been directed to look after non-IPL related issues.

FICA Executive Chairman Paul Marsh said it was imperative that the ICC Board also acted strongly in response to the situation involving Srinivasan who is scheduled to take over as the first chairman of ICC Board in June.

Marsh called on the ICC to take note of the Supreme Court’s recent orders and apply the same principles to ICC activities.

“Serious allegations of betting and spot fixing in IPL 2013 have been made against Gurunath Meiyappan as the alleged Team Principal of Chennai Super Kings [CSK] and these remain the subject of proceedings before the Indian Supreme Court,” said Marsh in a media release.

“While we are pleased that Mr Srinivasan, at the behest of the Supreme Court, has agreed to step down from his duties as BCCI President, we are of the firm belief that he should not be exercising any functions on behalf of the ICC either, while any investigations concerning his conduct or that of his company are pending or unresolved,” he said.

Noting that Srinivasan is the MD of Indian Cements Limited that owns IPL team CSK and also the father-in-law of betting accused Meiyappan, Marsh pointed out the apex court’s directive asking all persons connected with the cement firm, barring players and commentators, to stay away from BCCI.

“The Supreme Court order from last Friday noted that Mr Srinivasan had made a written offer through his legal counsel to step aside from his functions as BCCI President until investigations into the allegations against him were completed.

“The Supreme Court has issued an interim order prohibiting any employees of India Cements Limited (other than players or commentators) from performing any duties for the BCCI. FICA understands that the order applies to Mr Srinivasan, as Managing Director of the company,” Marsh said.

“The cricket world has been told time and again by the ICC that corruption is the game’s biggest issue and that the game has a zero tolerance approach to it,” said the FICA Chief Executive.

“For our game to survive we need it to be not only free of corruption but free of any suspicion of corruption.

“The ICC needs to put the reputation of the game and confidence in its procedures first. The players, and other stakeholders in the game, are entitled to expect this from the ICC’s Executive Board.

“Under the current circumstances, the prospect of Mr Srinivasan taking the highest posting in world cricket while these matters are unresolved, is an impossible one,” Marsh added.

FICA is the umbrella body for players around the world but no Indian cricketer is its member.

The BCCI and FICA have been at loggerheads over several issues in the recent past and the latter had opposed the structural changes, perceived to be spearheaded by the Indian body, effected in the ICC recently.

Marsh had called ICC’s decision to approve changes to its governance, competition and financial models as “a very sad day for our game.”

“FICA and its members will continue to oppose these changes in the interests of the game’s future,” Marsh had concluded. 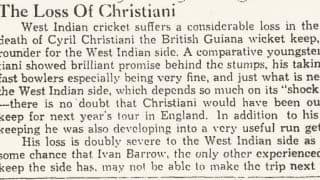