N Srinivasan's daughter could be next TNCA president: Report

N Srinivasan's daughter could be next TNCA president: Report

Rupa Gurunath, former BCCI president N Srinivasan‘s daughter, could soon become the first ever woman to head a state cricket association in India. According to a report, Rupa’s name is being discussed among the Tamil Nadu Cricket Association‘s (TNCA) representatives for the upcoming election as a nominee for the post for president.

As per The Times of India, the development took place during an informal meeting of top TNCA officials recently.

“Even though she is a newcomer to cricket politics, Rupa is extremely hands-on when it comes to cement business. She is a chip off the old block and we believe she will be up for the challenge,”a source told TOI. “Rupa knows the BCCI bigwigs very well and given her track record as a top boss of India Cements, she will be quite a force in the new scheme of things. And the fact that the TNCA old guard will be there to help her, it shouldn’t be a problem for her to run the ship.”

Despite no other candidate’s name coming up for discussion yet, Rupa will only become president only if the members have no issue. “Nothing will be imposed upon members. If Rupa becomes TNCA chief, it will be because the members want it,” a source was quoted as saying in the report.

The Supreme Court on Friday allowed TNCA to conduct elections which has been functioning without a president for almost three years now after Srinivasan stepped down from the post in 2017. 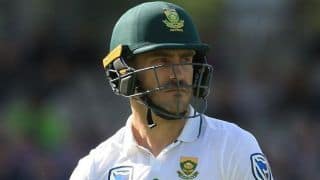