The historic Eden Gardens on Tuesday turned the clock back as Nari Contractor and Ted Dexter, the oldest surviving former captains of India and England respectively, recounted about the 1962 Test. 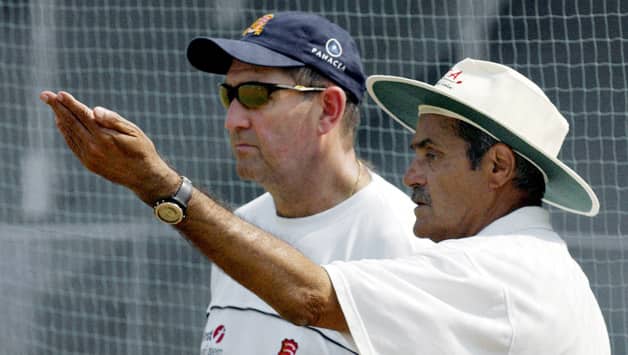 The historic Eden Gardens on Tuesday turned the clock back as Nari Contractor and Ted Dexter, the oldest surviving former captains of India and England respectively, recounted about the 1962 Test.

India’s turnaround had begun at the Eden in the Test began way back on December 30, 1961 as the Contractor led side won the match by 187 runs before winning the Chennai Test to win the five-match series 2-0.

“Those were the memories. It is nice to see Ted bring the scorecard with him,” Contractor said as the duo was felicitated by CAB during their celebration of 80 years of Test cricket at Eden.

Contractor’s memories are still vivid of the entire series.

“Bombay was an even game. In Kanpur, we had an upper hand then this gentleman (Ted Dexter) played a brilliant innings and saved the match for England. Delhi was a washout. The fourth match was played here (then Calcutta).”

“I was in fact the first Indian captain to introduce the procedure of team meetings on every day of the match to discuss the same.”

The point was to implement the decisions we took on the field.

“On the third day, they (England) were 200 for two, with Ted and Ken Barrington batting. I took Polly’s (Umrigar) advice on the field. But my intuition was to continue with the slow bowlers.

“I spoke to Vijay Hazare and he told me to take the new ball. I handed the ball to Ramakant Desai but still it rankled me. So Desai handed the ball back to Salim Durrani and as luck would have it, he got Barrington out in the over. In the next over Chandu Borde got Ted out. The series was decided here in Calcutta.”

Contractor also had special memories of Tiger Pataudi and said: “I played in only two Tests with him. He was very quiet in the dressing room. But that was maybe because he was young and trying to make a mark.”

Excited to see Contractor after 50 years, Dexter said: “I haven’t seen Nari for 50 years now. We are the survivors.”

“In that series, I kept telling Nari I got the runs and he kept telling me how he got me out. I usually don’t remember how I get out (laughs),” he said.

On the Kolkata Test, he said: “Chandu (Borde) was my problem in that series. He got me out about five times. The series was a well-contested one. But their bowling attack was more suited to the conditions and so they beat us, in Kolkata and Chennai as well.”

“But the good thing is that it was a very young England team and most of the players who played in that series went on to have long careers.”

On playing in India, Dexter said: “When you play in India, you play against the whole of India. And that is a great feeling. It shows how all the people are so involved with their cricket.”

“He always had a joke going on with somebody. He was a leg-puller.”

BCCI may want their money back after IOA suspension