Afghanistan have lost half their side with not many runs on the board.

Nasir Jamal is dismissed for 17 off 52 deliveries caught behind off the bowling of Ravi Bopara against England in ICC Cricket World Cup 2015, Pool A match 38 at Sydney. The match has been reduced to 45 overs per side following two rain interr uptions. Afghanistan have not looked comfortable right from the beginning and the England bowlers to their credit have not given an inch away. LIVE BLOG: England vs Afghanistan

England will be delighted with the fact that they have picked up a wicket as soon as play resumed after the second rain interruption. James Anderson and Stuart Broad had dismissed the openers early. Chris Jordan then chipped in with a couple of wickets and Bopara has now struck in this match, who has replaced the injured Moeen Ali in the starting line-up. LIVE SCORECARD: England vs Afghanistan

England captain Eoin Morgan had earlier won the toss and elected to bowl first. Bopara and James Tredwell come into the side in place of injured players Moeen Ali and Chris Woakes. Both teams are already out of the World Cup and are playing for pride as none of them would want to finish at the bottom of the Pool A table. LIVE STREAMING: England vs Afghanistan

It’s looks like a kabaddi match, but it’s in fact cricket! 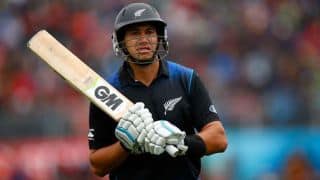