Nasir Jamshed is the fifth player charged in the scandal which saw a one-year ban, six months suspended, and a fine meted out to fast bowler Mohammad Irfan last month.

Pakistan cricket charged former Test batsman Nasir Jamshed on Tuesday with obstructing and failing to cooperate in an investigation into a spot-fixing case which rocked their T20 league. Jamshed, 27, is the fifth player charged in the scandal which saw a one-year ban, six months suspended, and a fine meted out to fast bowler Mohammad Irfan last month. Three other players, Sharjeel Khan, Khalid Latif and Shahzaib Hasan, will fight the allegations before a three-member tribunal headed by a retired judge. Pakistan Cricket Board (PCB) said Jamshed, who was arrested in Britain in February and bailed until this month in the same case, was charged on two counts. Nasir Jamshed s wife takes dig at PCB following allegation of non-cooperation in spot-fixing inquiry

“Jamshed has been charged for violation of articles 2.4.6 (not cooperating with investigation) and 2.4.7 (obstructing and delaying investigation) of the PCB Anti-Corruption Code,” said a PCB statement. The Pakistan Super League (PSL) in February-March was hailed as a step towards restoring international cricket in Pakistan. But on February 10 Sharjeel and Khalid were suspended for allegedly meeting a man linked to an international betting syndicate. Sharjeel was charged with accepting a fixing offer and not reporting it to the PCB’s anti-corruption unit while Khalid’s alleged violation was to lure other players into fixing. Hasan was also charged with getting players into fixing.

Jamshed was allegedly a link between the bookies and players. He denies the charges. Jamshed was seen as a talented opener whose career was lifted with back-to-back hundreds against India in 2012 but was discarded after the 2015 World Cup due to lack of form and fitness. Sharjeel and Khalid appeared before the tribunal last month and have until May 5 to respond to the charges. The tribunal is set to start day-to-day proceedings from May 19.

Irfan confessed to “not reporting a fixing offer” and opted for “agreed sanction”. 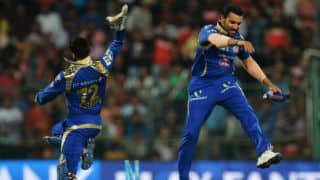