The board chairman Shaharyar Khan had said that Jamshed has been avoiding the PCB s anti-corruption officials and lawyers by constantly changing his numbers and addresses in the United Kingdom (UK) where he is currently staying.

Pakistan opener Nasir Jamshed has released two video messages conveying that he is willing to cooperate with the Pakistan Cricket Board (PCB) in relation to the spot-fixing scandal that hit this year s Pakistan Super League (PSL). In the messages shared with GEO TV, Jamshed denied claims that he has deliberately avoided PCB investigators and said that he is ready to speak to the PCB, but not until the UK s National Crime Agency (NCA) concludes its own investigation. The PCB had said last week that Jamshed will be punished in absentia under its anti-corruption code of conduct if he does not cooperate with the spot-fixing inquiry.

The board chairman Shaharyar Khan had said that Jamshed has been avoiding the PCB s anti-corruption officials and lawyers by constantly changing his numbers and addresses in the United Kingdom (UK) where he is currently staying. If he does not cooperate with us then he will be punished as per rule under the anti-corruption code even if he does not come to Pakistan, Shaharyar was quoted as saying by a PTI report. He is seen as a central figure in the fixing investigations by our experts and they want to go to London and interview him but so far he has avoided contacts and has kept on changing his phone numbers and addresses, the report further read.

Jamshed s wife had taken a dig at PCB over the allegations. The cricketer was arrested in England by the NCA in February over the case that saw Sharjeel Khan, Khalid Latif and Shahzaib Hasan sent home at the start of the tournament and getting suspended under the PCB s code. Here s what Jamshed said in the videos:

Jamshed, who has played 2 Tests, 48 ODIs and 18 T20Is for Pakistan, said in his first response since PCB s allegations: I am willing to cooperate with the PCB but request that the NCA inquiry should be completed first. I have not changed my residence nor am I hiding from anyone. 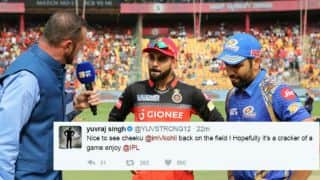