Hussain led out few points, which he believed Strauss should work on.

Hussain in his Sky Sports’ column wrote, “Yes, our one-day cricket has been abysmal for a long, long time and needs a serious overhaul but it’s not all doom and gloom in English cricket; historically we produce some very good Test match cricketers and that’s still the case, as parts of the West Indies tour proved.”

“So let’s not bundle it all together and say we’re rubbish at everything; let’s put a plan in place to ensure we can compete with the best in the world in all formats.” READ: England hiring Australian coach will be an insult: UK newspaper

Speaking about his time with his former team-mate, Hussain said, “Having played and worked with Strauss I can say he’s a decent, trustworthy, honourable bloke who will front up when things aren’t going particularly well; he won’t hide and make excuses.”

Hussain also felt that that the England and Wales Cricket Board (ECB) have done well in selecting Strauss as their director.

“I think the ECB have selected well; Strauss will have to distance himself from his former team-mates because he’s going to have to make some tough decisions but he’s up to the task.” READ: In Michael Vaughan, England cricket have lost a goldmine that could have turned their fortunes

Hussain led out few points, which he believed Strauss should work on. READ: ECB’s job description for ‘Director of England Cricket’ role leaked

“Planning is key – small things add up. Strauss was part of one of the most successful off-field, on-field partnerships that England have ever had. He, Andy Flower and Hugh Morris were meticulous in their planning ahead of the 2010/11 Ashes and it resulted in one of the great victories. Were England’s farcical warm-up games against St Kitts & Nevis the best preparation for a Test series against the West Indies?”

“It’s time for some flair and risk-taking. The game has changed since Strauss was a player. Discipline and patience have worked in the past but there has to be room for players with the X-factor whether that’s somebody with a bit of extra pace – like Liam Plunkett or Mark Wood – or a genuine spinner like Adil Rashid who gives you more of an attacking option. The same goes for the batting. Alex Hales has been smashing it around for Notts and other countries would throw him in.”

Hussain also asked Strauss to find out the ‘frontline’ spinners for England.

“Where are our frontline spinners? The series in West Indies highlighted our shortcomings in this area. Why didn’t either James Tredwell or Rashid play in the last two Tests? We have 18 first-class counties, while £9m is going to Loughborough every year and yet we have a situation where two lads who predominantly got into the England side as batsmen are trying to spin out the opposition. We need to produce born-and-bred spinners.”

“It’s never too early for succession planning. It’s something we need to look at, especially in the bowling department because James Anderson and Stuart Broad won’t be around for ever. Who is going to take over from them and are enough spinners coming through in county cricket? Australia are showing that bowlers win you games in all formats.”

He pointed out that consistency will be crucial for the England team under the new Director and chairman Colin Graves.

“Consistency is crucial. Our cricket needs to evolve and Colin Graves, the incoming ECB chairman, and chief executive Tom Harrison will want to do things their own way but there needs to be a clear goal in mind. You can’t send out mixed messages – otherwise you end up with a complete mess, as demonstrated by the Kevin Pietersen situation.”

Hussain wondered how England and Strauss will handle Kevin Pietersen.

“Pietersen’s future needs clarifying once and for all. My view remains that Pietersen should have been left out on cricketing grounds above anything else. We’ve had these mixed messages from the ECB so what is Strauss’ position? Can Pietersen play for England again? Once we know that we can all move on.”

Speaking on playing on different types of pitches, Strauss said, “Are we playing on the right type of pitches? Plenty of pitches around the world – in particular the drop-in ones in Australia and New Zealand, plus those in the Caribbean, India and Sri Lanka – are pretty dead whereas in England we play on little green seamers where someone who can hit the seam and wobble it around is selected ahead of someone like Mark Wood, Mark Footitt or Tymal Mills. What we actually need, as we found out in the World Cup, is someone who runs up and bowls as quickly as they can with a slingy action. Are we producing the right type of bowler? Should we be introducing drop-in pitches in England, in particular in one-day cricket? Shouldn’t we try it so we are playing the same brand and style of cricket as everyone else?”

“We still need to revamp our one-day structure. The 50-over game we play in England and the one we saw in the World Cup are chalk and cheese. We talk about changing things a lot but when are we going to do something about it to change our brand of cricket? Are we attracting the right players? Should we introduce franchises? We also need to delve down all the way to grassroots cricket and ask if young cricketers are being over-coached.”

“Let’s clarify our selection policy. On a few occasions now players have become ‘unselectable’ having been selected – Steven Finn, Simon Kerrigan and Adil Rashid. Why are the selectors picking players that people around the squad don’t seem to have faith in? Are the selectors involved now too far away from the modern game? Have any one of them played modern one-day cricket? Names like Paul Collingwood and Marcus Trescthick will continue to be bounded around until we realise that 50-over cricket has gone like 20-over cricket and we are behind the curve.”

“The game is always evolving. The regulations are already changing. We can’t just turn up to the next event and think it’s going to be the same as the last. When I got my Sky job – Duncan Fletcher said to me ‘well done, but in a few years’ time the game will have changed so even if you think you know everything now you won’t then’. He was spot on – in a few years’ time Kevin Pietersen was switch-hitting Scott Styris out of the ground. That would never have happened in my era!”

“It’s good to talk. Garner opinion from people who see cricket all around the world; speak to the odd umpire or coach – get input from other people who aren’t in that little bubble of the England cricket team. The game moves on very quickly and you have to move with it very quickly or you get left behind.”

“The players are the ones that need to take responsibility. We didn’t lose one-day games because of Paul Downton – we lost them because we haven’t got the right style of player. They are the ones players who have to take responsibility for the wins and losses. It’s up to the managing director or board have look after things on a short and long-term basis and assesses what is being done right, what is wrong and how to improve.”

“The captain of the England cricket team is the person who sets the tone from day to day. That’s why I enjoyed working with Duncan – he was crystal clear that on a daily basis I was in charge of that cricket team. But I was crystal clear that behind the scenes Duncan knew how we needed to move on and the type of cricketer we needed. He was very good at the logistics; clearly we would both have input in different areas but I would say that Strauss needs to be operate behind the scenes rather than be hands-on with the team.” 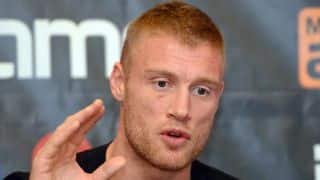 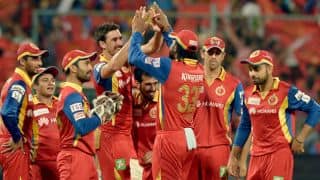 Royal Challengers Bangalore will get momentum ahead of IPL 2015 playoffs by beating Mumbai Indians: David Wiese