Nathan Coulter-Nile has overcome a bout of vertigo that saw him leaving the field during a Big Bash League match.

Nathan Coulter-Nile has overcome a bout of vertigo that saw him leaving the field during a Big Bash League match last week. He is set to fly with the Australia squad for India limited-overs tour on Monday.

Midway during his over while playing for Perth Scorchers, Coulter-Nile slumped to the Adelaide Oval before walking off the field. He was later taken to a hospital for MRI and CT Scans.

This is the second time that the 31-year-old pacer has endured vertigo after the first attack eight years ago.

However, Coulter-Nile is feeling better and looking forward to the India tour. I just had my first bowl since having vertigo so I got through that and feel pretty good and obviously I m looking forward to going on Monday, Coulter-Nile said. I ve done everything I can to try and find out why. But I haven t got a lot of clarity. I had this eight years ago but it came out of the blue this time. I think it was just a bit of bad luck, that s the way it s been described to me. It was just the perfect storm and perfect movement of the head in an aggressive manner.

Coulter-Nile now feels he should have avoided completing his over against Adelaide Strikers. If it happened regularly, more than once every eight years, they d probably worry about it a bit more. I don t know how to describe it. You feel like you re moving the whole time even when you re not. The world spins. It s not a great feeling. My fourth ball I sort of felt a little bit dizzy, and then by my last ball I was pretty sure I knew what was going on. I probably shouldn t have bowled that last ball, he said.

Coulter-Nile has played 22 ODIs in which he has 38 wickets at 26.60 and feels selection in the Australia squad for the World Cup in England will be the pinnacle of his career.

I think the World Cup s the pinnacle of anyone s career. But for me personally, having not played a World Cup or anything of the sort I think and would definitely be the highlight of my career, if I can get there, he said. 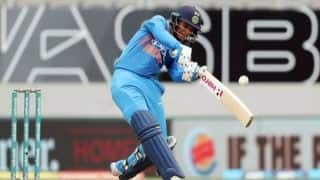