Nathan Hauritz has quitely announced his retirement from all forms of cricket, thus bringing an end to his 15-year old healthy career.

One of Australia reliable spinners, who helped Australia and played a mjor role in their spin department, after the void space left behind by the legendary Shane Warne, Nathan Hauritz has quitely announced his retirement from all forms of cricket, thus bringing an end to his 15-year old healthy career of cricket. He was later went on to be replaced by a better and quality spinner by the like of Nathan Lyon, however, his contributions to the Australians cricket and spin department has never been left unappreciated. Although, he never played a part in any major ICC tournament for Australia, however, he is regarded as one of the prime Australian spinners, who has played 17 Tests, 58 ODIs and three T20Is. His announcement comes just a day after his Big Bash League (BBL) side Melbourne Renegades were elimintaed form the tournament on Monday. He had been under the state cricket contract of Queensland until 2013-14, before he ran out of the contract and struggled to get to his best form for the past couple of seasons, reports The Age. Nathan Hauritz injured in nightclub fracas

“I was toying with it after I played with the [Sydney] Thunder and found out I wasn’t going back there [after last season]. . . but I got an offer from the Renegades at the same time, because they want to play two spinners,” he said. “It was really tough that I wasn’t playing and training at that level anymore to get straight into it. I felt the pressure a lot more than I usually had. This year, I felt that if things weren’t 100 per cent right – I started to feel I was done – I don’t want to go through more heartache or disappointment, [just] to try and finish on a high,” he added.

Hauritz was also occasionally paired with Xavier Doherty, the man who eventually replaced him during the 2010-11 Ashes. “I competed as hard as I could, but I just felt that me competing as hard as I could wasn’t good enough,” he said. “They were that night, but I just didn’t have a different answer. I’m not in a competitive environment every week to [confidently] . . . try something different. I was just so shattered after the game. I realised I hadn’t come down here to be that disappointed about a game of cricket anymore. I thought ‘I don’t need that anymore’. I just want to get away,” he added.

Hauritz, who headn from Queensland, spent most of his career days, playing for New South Wales. His retirement means that he would be headed for the Masters Champions League to be held in February at the UAE, but he looks forward to finish his career in Australia. “The highs and lows [are too much]. I need to get off that up-and-down rollercoaster and get back to a bit of normality in life. I have a lot of good memories, obviously a few bad ones mixed among them. But I’ll definitely look back at my career very proud and very happy with what I achieved,” he said.

One of the notable point in his career was that he was dropped from the side before the final 2009 Ashes Test at the Oval,  a track that suited spin, and was also dropped during the opening of the 2010-11 Ashes, eventually ruling him out of the side, completely. Although he was selevted for the World Cup once, an injury led to his withdrawl and was replaced by Jason Krejza. His best stine was during the 2009-10 Boxing Day and New Year’s Test against Pakistan, scoring 75 as the night watchman and also claiming his maiden five-wicket haul for 101, in Test cricket as well as Forst-Class cricket. His second best spellmof 5 for 53 came during the Suydney Test against the very same team.

“I want to be able to go to games, watch these kids bowl and teach them my training strategies and what helped them improve. I want to get rid of that mantra that you’re only a spinner when you’re 26, 27. I want to be a shoulder to cry on. I always felt if I could have a mentor on call 24-7, even to catch up with for a beer to talk cricket, [it would have been great]. I feel a mentor for a spinner is essential,” he said. 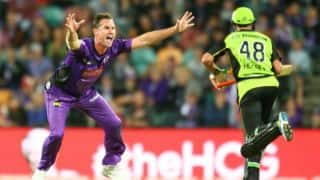