In the 12th over of innings of the DUrban Test Nathan Lyon and David Warner ran AB de Villiers out for a duck.

Nathan Lyon has been charged for dropping ball on AB de Villiers after running him out in the Durban Test. In the 12th over of innings Lyon and David Warner ran de Villiers out for a duck. It was after disturbing the bails Lyon dropped the ball near de Villiers. The video footage of the incident suggests it to be intentional.

Match referee, Jeff Crowe is set to charge Lyon with Level 1 breach of the ICC Code of Conduct for Players and Player Support Personnel after looking into the incident. The charge will carry a minimum penalty of an official reprimand, a maximum penalty of 50 per cent of a player’s match fee, and one or two demerit points.

According to reports in cricbuzz it is known that the Lyon apologised to de Villiers and conveyed to him that there was no malice intended.

However, Faf du Plessis didn’t seem much amused by the incident and called it usual in a competitive game.

It’s not anything out of the ordinary for me. We certainly don’t complain about it. It’s big men playing competitive sport. I didn’t even see the footage of Lyon dropping the ball until this morning, so it’s not like it was anything extra for us. We just play. Obviously Australia were on top for most of the game, and generally when you’re on top that sort of stuff happens,” du Plessis said.

The visitors won the match by 118 runs taking a lead of 1-0 in the series. Mitchell Starc was awarded the Man of the Match for picking up nine wickets. The second Test will begin on March 9 at St George’s Park, Port Elizabeth. 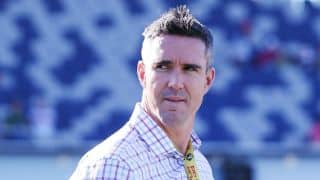