Nathan Lyon kept Australia again on top as Bangladesh were struggling at 155 for the loss of five wickets at tea break on Day 1 of second Test.

Australia were again on top as hosts Bangladesh were struggling at 155 for 5 at tea on Day 1 of the second and final Test at Zahur Ahmed Chowdhury Stadium, Chittagong, on Monday. Nathan Lyon has so far grabbed 4 for 58. Following a shaky first session, where Bangladesh lost 3 for 70, it was expected that the post-lunch session would see improvement from the Bangladesh batting. They did get 85 runs, but lost a couple of wickets in the process. Australia still hold a tight grip over the hosts owing to their tough bowling so far, which is somewhat evident from the fact that Soumya Sarkar remains the top-scorer in the innings so far, with 33. FULL CRICKET SCORECARD: Bangladesh vs Australia 2017, 2nd Test at Chittagong

Mushfiqur Rahim had won the toss and elected to bat first. Bangladesh had a shaky first session, losing Tamim Iqbal, Imrul Kayes, and Soumya, all leg-before to Lyon. Mominul Haque fell for 31 after being trapped leg-before, once again by Lyon. The score read 85 for 4. Mushfiqur himself dug in, but Shakib Al Hasan fell on 117, caught behind by Matthew Wade off Ashton Agar. The partnerships failed to build up as Bangladesh continued to struggle with a regular fall of wickets. FULL CRICKET UPDATES: Bangladesh vs Australia 2017, 2nd Test at Chittagong, Day 1

Bangladesh reached 150 just before tea. With Mushfiqur and Sabbir Rahman on the crease, they will ideally want to stretch their score to 250, while the Australian spinners will try to keep them to under 200. 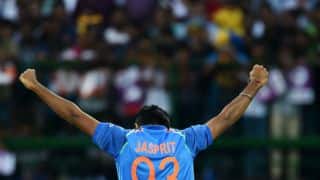