Currently, the No. 1 bowler in Australian Test cricket team, Nathan Lyon has outlined his next major career goal.

The 26-year-old told cricket.com.au, “There’s no point in hiding behind it; I want to play all three forms of the game for Australia.”

Lyon, currently Australia’s top spinner with 112 Test wickets and has played a major role in victories over England and South Africa, last year. So, with that brilliant performance, it’s sure that no one would be surprised or offended with his preceding statement. It’s really surprising to see Nathan with such a bold mindset after having been dropped twice from the Test squad over the last six months.

In fact, it was he who MS Dhoni thrashed last February in Chennai only to see him getting dropped from the squad while on-form and to be replaced by Xavier Doherty, the left-arm spinner. Later, he was back in the series with a career-best figure of 7-94 in Delhi. But during the Ashes, it was Ashton Agar who was picked ahead of him as he had to watch from the sideline his team play during the first two Tests.

Australia was winless in-between those tours for nine matches, which allowed Lyon to travel back home and sweat it out with Australia’s spin bowling coach, John Davison. They coupled again during the pre-Ashes tour to UK. Davison, who is famous for his blistering century against West Indies in the 2003 World Cup at South Africa in just 67 balls while playing for Canada said that the time-out from the Tests surely helped Lyon to get his form and rhythm back.

“Leading into the Ashes he was going through a bit of a form slump,” Davison told cricket.com.au.

“But in hindsight, it was really a positive time for us because we had a chance to go back and work out what he did well and what he needed to do to get back bowling the way he wanted to be bowling. So it gave us a real opportunity to break things down with a simple plan that worked and things that he could go through when he was under pressure.” he added.

With now a secured Test spot, Lyon must learn to handle pressures during his classes with Davison. His inability to guide Australia to victory, especially in the fourth innings has been a glitch in his career.

His critics remind of South Africa’s brilliant victory in Adelaide almost a couple of years back and their radiant effort during the victory against Australia in March at Newlands, Cape Town. The brunt of taking wickets was low from Lyon in the match. Off late, he has started working with Australia’s team psychologist, Michael Lloyd to covenant with the extra pressure during the final day of the Test matches.

Davison said, “It’s actually a really tough gig for spinners with the expectations that go onto them on the last day. The ball’s thrown to them and the public and the team and management are expecting you to win the game…. but he realises that that’s his job and the more he does it, the better he’ll get, hopefully.”

“Your mental state will affect your physical state so it’s a combination of all those things. That’s what sport is; playing under pressure and allowing your body to do what it’s trained to do and getting your head out of the way. There’s definitely some multi-faceted skills to be able to perform in those situations.” he added.

Alongwith Davison and Lloyd, Lyon also takes useful tips from two of the greatest legends of spin-bowling in all-time cricket history, Australia’s Shane Warne and Muthiah Muralidaran of Sri Lanka. He worked with Warne in South Africa this year and spent four days with Murali in June. The Sri Lankan maestro would again be pairing up with him during the trip to UAE for the series against Pakistan. It’s a privilege for Lyon to be surrounded with an unparallel experience of the two legends.

Lyon said, “(Murali) is a great man. He’s willing to offer his advice and help all the spinners coming through so I’m really grateful for the opportunity to work with him. He’s a legend of our game; anyone who’s taken 800 Test match wickets must be doing something right. It was a big part of the mindset for me and how to approach fourth innings in Test matches, for example, either here or over in the subcontinent.”

“I really enjoyed my time with him (in June) and there were a few secrets that Murali handed out, but I’m going to keep them close to my chest and hopefully put them into practice come the next few Test matches. To sit down with someone who’s mastered his craft at the top level for a long time and to learn off him, I’m going to be like a little sponge, I think, just trying to get every little bit of information out of Murali.” he added.

With a secured Test spot, he was brought back into the Australian one-day squad when he played his first ODI against Zimbabwe since March 2012. It’s a new beginning for Lyon’s career with the white-ball after he was first noticed in the frame during the inaugural edition the Big Bash League for South Australia. It’s a great time for Lyon to return to the limited-over framework with the World Cup at his home soil just round the corner.

“As a kid growing up in Australia, knowing there’s a World Cup in your home country, to play in one of them would be a dream come true,” he said.

“It’s definitely one of my goals and luckily enough I’ve been given the first opportunity to put my hand up for selection and I can only do that by performing well for Australia. So I’ll get my opportunity … and I look forward to taking it with both hands.” he quoted. 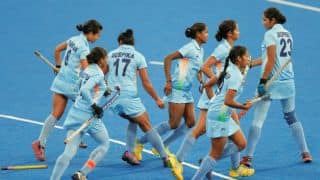 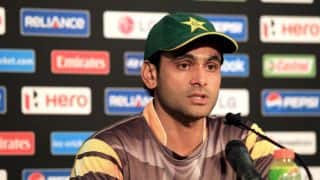