Nathan Lyon, who claimed the first 4 Bangladeshi wickets was counterattacked by middle-order batsman Sabbir Rahman and the former made a big statement, when he compared the Bangladesh batsman to India s Virat Kohli.

Nathan Lyon has been a match-winner for Australia in recent years. In subcontinent conditions where Australians have struggled in the recent times, Lyon has been a hope for them. His 7 for 94 in the second Test against Bangladesh at Chittagong, a must-win match for the visitors after going down by 20 runs at Mirpur in the first Test last week, bears testimony to that. Lyon, who claimed the first 4 Bangladeshi wickets was then counterattacked by Sabbir Rahman. Following the assault, Lyon made a massive statement, comparing Sabbir to India s Virat Kohli. ALSO READ: Lyon admits 2nd Test against Bangladesh his most physically taxing

Kohli is regarded as one of the best batters in the world cricket at this moment and may end up as India s greatest. Sabbir s 66 and the 105-run sixth wicket stand with skipper Mushfiqur Rahim guided Bangladesh s recovery. Lyon complemented the batsman as brave and said, He is a good player, he reminds me of Virat Kohli. [Kohli] is probably a pretty good role model to have in the subcontinent. That s only on [Sabbir s] persona out there and the way he walks around the crease and the shots he s played here. We find [Sabbir] doesn t really want to defend, he wants to take the game on and that s brave cricket.

He batted pretty well today. He played some nice shots. He was lucky here and there but you need a bit of luck in cricket. I had a bit of luck today with the stumping, it probably wasn’t the best ball I have ever bowled in Test cricket. He s a good cricketer, we re definitely paying him a lot of respect that’s for sure.

Sabbir made his Test debut against England in October 2016. He impressed all with 64 not out that took Bangladesh to the brink of a historic win. He didn t get enough support as the hosts fell short by 22 runs. However, they came back hard in the second Test to win it and square the series 1-1. 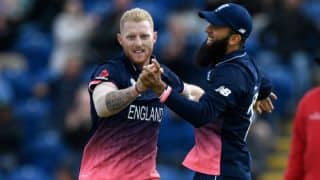