India were bowled out for 444 on the fourth morning as Nathan Lyon took five wickets.

Nathan Lyon‘s five-wicket haul helped Australia take a lead of 73 on Day Four of first Test against India in Adelaide. Resuming the day on 369 for five, up against Australia’s 517, India crumbled on the morning and only some late hitting helped them extend their challenge.

Late on Day Three, Virat Kohli pulled Mitchell Johnson to fine-leg, to be dismissed for 115. Until then, India looked in firm control of their innings. However, the wicket of the centurion allowed Australia a foot in the door and on the fourth morning, they opened the floodgates to bowl India out quickly. In hindsight, Kohli’s wicket did prove to be crucial in Australia securing the 73-run  lead.

India started off well with Shikhar Dhawan playing some great strokes. After his dismissal, Cheteshwar Pujara and Murali Vijay put up a solid partnership. Vijay was in an attacking mood and took on Lyon head on by using his feet to him. His innings of 53 provided India much needed stability.

Pujara too looked in good touch. He was particularly fluent on the off-side and played some good drives and cuts. His 73 was cut short by a ball that lobbed onto his body and crashed into the stumps off Lyon. But, it was Kohli’s day as his stole the limelight with his second ton in Adelaide. Kohli’s innings was particularly dominant. Anything on the body was put through the leg-side and anything with width was hit on the off. Ajinkya Rahane’s 62 helped him dominate. At 367 for four, things looked good for India until Kohli played that hook off Johnson.

Wriddhiman Saha and Rohit Sharma battled through the last few minutes and stayed unbeaten till stumps on Day Three. The following morning, Lyon took control with the batsmen getting his eye in. Rohit was dismissed for a gritty 42 as he lobbed a catch back to Lyon. Karn Sharma was bowled by Siddle. Saha and Ishant Sharma were then picked in quick succession by Lyon. Mohammed Shami swung his bat around for a useful 34 until he was caught behind off Peter Siddle. 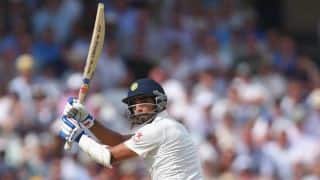