Pakistan A battled through a half-century from Sami Aslam and Abid Ali s unbeaten 83 but Lyon s five-for kept them to 247/6.

A week ago, Nathan Lyon had said that he would readily bowl ugly if the need arises during Australia s Test series against Pakistan in the UAE. On Saturday, the offspinner took his first step towards the same with a five-wicket haul against Pakistan A in the opening day of the first practice match.

Plenty has been spoken regarding Australia s need to tackle Pakistan s spin if they are to succeed in the Emirates. However, with Lyon in their ranks, Pakistan cannot afford to take Australia s spin lightly. As proved during the tour of India last year, the 30-year-old is more than capable of providing serious damage with his cunning bowling, as evident from his figures of 5/87 at Dubai s ICC academy.

Pakistan A battled through a half-century from Sami Aslam and Abid Ali s unbeaten 83 but Lyon s five-for meant that the home team was kept to 247 for the loss of six wickets in 92 overs. There was more good news for Australia, as Mitchell Starc, playing his first competitive match since March, showed no signs of worry and bowled 17 overs of pace, albeit going wicketless.

Shan Masood was Lyon s first wicket, before Aslam and Ali combined to put on 82 runs for the second wicket. The runs were hard to come by, but despite Lyon s threatening off spin, Aslam looked in flow and brought up his half-century before edging to Tim Paine for 51. Lyon them removed Iftikhar Ahmed and Usman Salahuddin in quick succession, and with Asad Shafiq falling to Jon Holland for 14, Pakistan were in a spot of bother.

Abid and Saad Ali resisted to add invaluable 75 runs for the sixth wicket with the No. 7 batsman scoring four boundaries during his 64-ball knock. After frustrating Australia for nearly 20 overs, Lyon broke the stand to pick up his fifth with another nick to Paine behind the stumps for his third catch of the day. 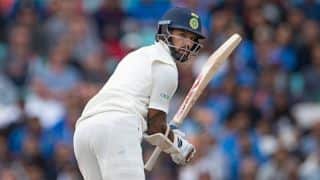