I think 305 was a little bit short, but they batted really well and took the game away from us." - Mashrafe Mortaza

England gave Bangladesh a sound thrashing in the opening game of the ICC Champions Trophy 2017 at The Oval on Thursday. Chasing 306 to win, English batsmen made mockery of the Bangladesh bowling attack, strolling to the target just for the loss of 2 wickets and with more than 15 balls to spare. The chief architects of English win were Man of the Match Joe Root (133)*, Alex Hales (95) and skipper Eoin Morgan (75)*. For Bangladesh, Tamim Iqbal (128) was outstanding. It was due to his effort that the side could post 305. However, skipper Mashrafe Mortaza felt that the total his side managed was not good enough to stop the rampaging hosts. FULL CRICKET SCORECARD, ICC Champions Trophy 2017, England vs Bangladesh Match 1

“I think 305 was a little bit short, but they batted really well and took the game away from us, said Mortaza while talking at the post-match presentation ceremony. On being asked if his batsmen did not do enough in the early as well as death overs, Mortaza accepted that his side lacked on that front. Initially, getting used to the pitch, the openers take a bit of time; at the end, when we have wickets in hand, we have to do better, he said, confirming he was not too impressed with the way Bangladesh ended their innings, especially in last 5 overs where only 43 runs were scored.

On being asked about the balance of the side, Mortaza said the team management decided to field eight batsmen for the first game, but the strategy may change for the remaining games: First match we decided to go with eight batters, but we have to think about it. The main bowlers must bowl better.

Mortaza was also questioned about the controversial decision in which Eoin Morgan was ruled not out after Tamim Iqbal took what looked to be a clean catch. The Bangladeshi captain though answered in just a single line. I think the umpires decision is final.

England will next take on New Zealand on June 6 but before that, Bangladesh will face Australia on June 5. 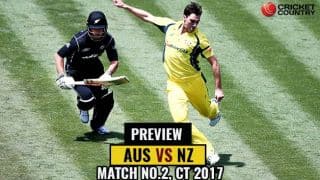