New Zealand posted a formidable 286 for 9 in their first One-Day International (ODI) against Australia in the Chappell-Hadlee Trophy 2016-17, at the Eden Park in Auckland on Monday. Being asked to bat first, New Zealand were off to a rollicking start thanks to Martin Guptill, who stroked his way to his 32nd ODI fifty. But the hosts lost their way in middle and squandered a chance to put up a target in excess of 300 against Australia. Jimmy Neesham scored 48 and Neil Broom got to his third half-century, as their knocks pushed New Zealand past the 250-run mark.

For Australia, Marcus Stoinis was the pick among the bowlers as his measly spell of all his 10 overs on the trot produced 3 wickets, which included the prized scalps of Guptill, Kane Williamson and Colin Munro. While Guptill turned out to be the best batsman for New Zealand with his 74-ball 61, Williamson fell for a 24 and Munro disappointed with a mere 2. However, it was due to Broom s gritty 73 towards the end of the innings which kept New Zealand together, helping them to a reach a total strong enough for their bowlers to exploit the depleted Australian batting line-up. FULL CRICKET SCORECARD: New Zealand vs Australia, 1st ODI at Auckland

Broom continued with his rich form that he had attained in the series against Bangladesh. Coming off a century and a 97 in the previous series, Broom showed a great deal of maturity despite running out of partners at regular intervals to push New Zealand as far as possible. He faced 75 balls for his 73, clobbered 3 sixes and 4 boundaries to record his third fifty in his career.

New Zealand were asked to bat first by Aaron Finch, who was the stand-in captain for Australia s stand-in skipper Matthew Wade. The wicketkeeper-batsman suffered an injury which ruled him out of the contest, and Finch made a brave call of fielding first despite his team lacking the likes of David Warner and Steven Smith.

Australia s decision looked wrong despite Mitchell Starc removing Tom Latham early. New Zealand scored at a brisk pace with Guptill swatting even the good deliveries all around the park. It was only in the 14th over that Australia had something real to cheer about. Williamson looked to flick the ball on the leg side, but got an inside edge and was caught for a 34-ball 24, off Stoinis. The all-rounder soon had Munro caught at mid on for 2, and bowled a spell against the run of the flow.

Stoinis delivery to Guptill which resulted in his dismissal was perhaps the best of the innings. The ball pitched in line of off stump and nipped back in, finding its way between Guptill s bat and pads to crash into the middle and leg. Before his dismissal, New Zealand had already lost Ross Taylor for 16, which compounded their problems.

Neesham and Broom got together when New Zealand were hobbling at 134 for 5. With not a great deal of batting left, these two were expected to bail their side out of trouble and they did. When they batted together, Neesham played the role of the aggressor while Broom was happy ticking along. Once Neesham was dismissed, Broom took over and pushed New Zealand as ahead as was possible. Neesham and Broom added 76 for the sixth wicket, which also happened to be the best partnership for the Kiwis.

New Zealand batsmen, however, failed to utilise the short boundaries at the Eden Park in Auckland as well as Guptill. In the process, he also became the batsman with most runs at this venue.

Australia missed having a specialist wicketkeeper dearly, as Handscomb standing in for Wade was exposed as he lacked the agility as well as presence at occasions. In all, Australia gave away 16 wides with several deliveries bouncing over the batsmen and Handscomb failing to grab. There were 8 runs via byes as well as 5 leg-byes.

Handscomb spilled two tough chances off the fast bowlers, and so did Shaun Marsh at the first slip. 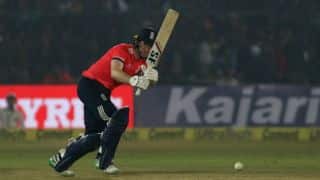 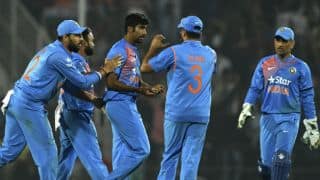