Nepal becomes the 27th team to attain an ODI status.

Nepal have attained One-Day International (ODI) status, thanks to Netherlands beating Hong Kong by 44 runs in the ICC World Cup Qualifiers 2018. Nepal now becomes the 27th side to be granted an ODI status, including the likes of World XI, Asia XI and Africa XI. Nepal have gradually been progressing in every tournament to reach this level. They have already featured in World T20 Qualifiers (2016) and Asia Cup T20 (2016). Nepal reached World Cup Qualifiers after finishing runners-up in the World Cricket League Division 2 Final in February. Nepal achieved all this despite Nepal Cricket Board being suspended by ICC.

Nepal s qualification comes due to the fact that Netherlands have already been given ODI status till 2022; after winning ICC World Cricket League Championship. Nepal finishes the World Cup Qualifiers as third-highest associate team, and thus was granted an ODI status. United Arab Emirates and Scotland have already attained ODI status will 2022, thanks to qualify for the super sixes stage.

Sadly, Hong Kong and PNG have lost their ODI status.

Batting first, Netherlands made 174 runs. They were helped by Maxwell Patrick O’Dowd’s 69, who was well supported by Peter Borren (31) and Bas de Leede (29). For Hong Kong it was Nadeen Ahmed with 3 wickets and Tanvir Afzal and Ehsan Khan with 2 wickets apiece that kept things tight.

Hong Kong in reply folded for 130 runs. It was Babar Hayat, who delayed the inevitable for his side. He scored 62 out the sides 130. Roelof van der Merwe starred with the ball for Netherlands, picking 4 for 18. PSL 2018, Quetta Gladiators vs Islamabad United, Match 28 Live Streaming: When and Where to Watch 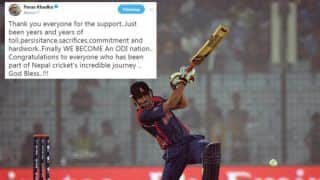