The two sides are expected to meet in November, expectedly ahead of Pakistan's ODI series against England.

The Nepal cricket team are set to face one of their biggest tests in recent times when they face Pakistan in a one-off one-dayer in the United Arab Emirates (UAE) in November later this year. According to a report on Kantipur, The match will precede Nepal’s upcoming fixtures against Papua New Guinea (PNG) in the upcoming ICC World Cricket League Championship, while the match is expected to take place before the start of Pakistan’s five-match ODI series against England. It will be Nepal’s first-ever match against the South Asian giants in its history. The development also follows the announcement of Nepal’s first-ever match at the Lord’s Cricket Ground, which is scheduled to take place in July next year. LIVE CRICKET SCORES AND UPDATES: PAKISTANIS vs NEPAL 2015, TOUR MATCH AT ABU DHABI

Nepal are set to face the Marylebone Cricket Club (MCC) at Lord’s next year, which will take place on the day that marks the 200th anniversary of British-Nepali bilateral relationship. The match will be preceded by the MCC touring Nepal in November later this year, during which they will face off against various sides. Cricket Association of Nepal (CAN) CEO Bhawana Ghimire was ecstatic upon receiving the news of the same. “MCC to tour Nepal from 12th Nov to 24th of Nov 2015, Get ready to cheers team Nepal !!! #WelcomeMCC #DreamsComeTrue,” Ghimire wrote in a post on her Twitter account.

The Pakistan cricket team have returned from their Zimbabwe tour in order to prepare themselves for the upcoming fixtures against England, which include three Tests, four One-Day International (ODI) and three T20Is. Misbah-ul-Haq will be captaining the Test squad, with the veteran hinting towards his possible retirement after the series should he prosper with the bat. 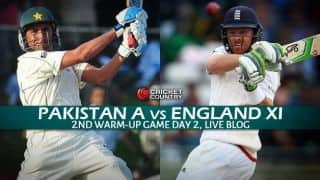