Malaysia: Nepal U19 cricket team registered an overwhelming 8 wicket victory against Ireland in the ongoing ICC U-19 World Cup Qualifiers currently taking place in Malaysia. With this win Nepal are on top of the league table winning all their four matches. Nepal and Ireland will again lock horns in the Finals, with the winner qualifying for ICC U-19 World Cup to held Bangladesh. Batting first Ireland posted 184/7 riding on half century of Aaron Gillespie. In reply Nepal chased the target losing only two wickets in 42.5 overs. Nepal openers, Sunil Dhamala (75)  and Sandeep Sunar (85) posted a partnership of 170 runs which is highest ever in youth cricket in Nepal. Live Cricket Scorecard: India vs South Africa 2015, 4th ODI at Chennai

Dhamala innings included three 4’s & three 6’s respectively in the 40th over itself before falling to Rory Anders. Sunar got out just 2 balls later being run out. Skipper Raju Rijal and Yogendra Karki then made the remaining 20 runs to guide Nepal to a memorable victory with Raju hitting Tom stalon for massive six. Earlier, Ireland chose to bat first after winning the toss with their opener’s captain Jack Tector and Andrew Austin making 53 runs. Prem Tamang then picked up 2 wickets in 2 balls first Austin (13) and then Dennison (0). Tamang also picked up Trector(46) in the19th over with Ireland still at the score of 72.

Ireland struggled with spin and lost 4 more wickets for mere 29 runs. Aaron Gillespie and Tom Stanlon put a great fight for the 8th wicket with 83 run unbeaten partnership. Gillespie made 58 runs hitting 6 fours and a six while Staton made 30 from 35 balls. The pair made 58 in the final 8 overs with getting 16 runs in the final over. Nepal bowled with discipline and perfect accuracy giving only 6 extras, also completing 50 overs half an hour early the allotted time. Nepal batted for 6 overs before going for lunch adding 24 runs. Live Cricket Scorecard: Pakistan vs England 2015, 2nd Test at Dubai 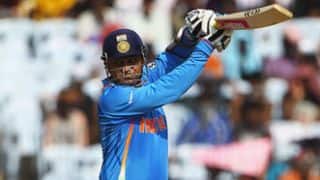