Nepal have now won 4 matches out of 10 and gain 8 points. However, they will remain behind Kenya who are leading with 10 points with 5 wins.

An unbeaten captain s knock by Gyanendra Malla, a maiden List A fifty by Dipendra Singh Airee and thrilling last-minute heroics by Sharad Vesawkar handed Nepal a 7-wicket victory against Kenya at home in Match 36 of ICC World Cricket League (WCL) Championship on Monday. Nepal have now won 4 matches out of 10 and gain 8 points. However, they will remain behind Kenya who are leading with 10 points with 5 wins. Netherlands top the table with 16 points. Nepal put off an all-round performance to ensure they won the final clash at home. Although Kenya received the early breakthrough, Malla and Airee s century-stand was the turning point. But the star remained Vesawkar who not only bagged a 4-for but also scored an 11-ball 24. Live Cricket Score, NEP vs KEN at Kirtipur, Match 36: NEP win by 7 wickets

Chasing a target of 156, Malla and Sunil Dhamala started the proceedings. They were off to steady start with 4 runs from the first over. However, Dhamala s poor form continued as he was dismissed cheaply for 1 with Elijah Otieno providing first breakthrough for Kenya. Sagar Pun joined Malla but could not withstand Kenya s bowling prowess and was dismissed for 5 in Otieno s very next over. But that did not hamper Malla s game. Along with Airee, Malla took the centrestage and Nepal reached 50-run mark by the 10th over. The partnership between the two batsmen read 42 runs at this point.

Maintaining a steady run rate, Airee and Malla played cautiously, managing ones and twos. The target came down to 80 by the 17th over. At this point Malla went for the big shots while Airee played a supporting role at the other end. Both moved at the same pace and were placed on 46 each by the 23rd over. Malla got to his fourth List A fifty first off 78 deliveries with 7 fours with a single. Airee followed on and got to his maiden fifty off 51 deliveries soon afterwards. The long 111-run partnership was finally broken by Collins Obuya, keeping the hopes alive for Kenya.

Once Vesawkar joined Malla, it was nothing less than a run-fest as he smashed 3 consecutive boundaries and took Nepal closer to victory. Malla added fuel to the fire by smashing a six before Vesawkar sealed things with a four and a six. After bowling tightly in the first game, the Kenyan bowlers were all over the place and found no momentum after the initial overs. Otieno ended with figures of 2 for 29 while Obuya got 1 for 22. Year-ender 2016: Nepal continue to push for international recognition in limited opportunities

Earlier, Nepal opted to field first and went ahead with an unchanged playing XI. Captain Paras Khadka missed out a successive match due to a niggle. Kenya began on a high note as opener Alex Obanda ended the first over with a six off Sompal Kami, but Nepal s bowlers got the better of Kenya batsmen. Veteran Mahaboob Alam got Obanda and Dhiren Gondaria for in the fourth over, and finished with 7-5-11-2 including 5 successive maidens.

Wicketkeeper-opening batsman Irfan Karim and Obuya balanced out the initial wickets by playing around with ones and twos. They reached 50 as late as in the 20th over. Obuya and Karim added 79 for the third wicket. Obuya missed out on his fifty when he fell to ace spinner Sandeep Lamichhane. This triggered a collapse. Karim was the next to be sent to the pavilion with Vesawkar getting his first.

Rakep Patel and Karan Kaul added stability to the innings, adding 20 for the seventh wicket. Then Vesawkar got Kaul and Shem Ngoche off consecutive deliveries, but Nelson Odhiambo avoided the hat-trick. Basant Regmi chipped in with 2 for 24, it was Vesawkar who drew last blood, thus ending the Nepal innings by 46.1 overs and finishing with 4 for 28. 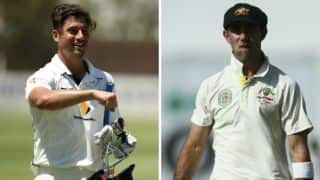