Aged 17 years and 103 days, Jora, who was making his debut, scored unbeaten 53 off 46 balls and went on to break the previous record set by Canada’s Hiral Patel, who was 18 years and 177 days. Jora hit 3 fours and a six in his unbeaten innings at the ICC Academy in Dubai.

Nepal's Sundeep Jora has become the youngest man to score a T20I fifty at the age of 17 years, 103 days with 53* on debut, but it wasn't enough to stop UAE claiming a 21-run victory in the 1st T20I in Dubai.#UAEvNEP scorecard ➡️ https://t.co/kds3bCLVqu pic.twitter.com/nekXry6lCF

However, chasing 154, Nepal side lost the match by 21 runs as the UAE bowlers defended the total without much difficulty. While the Paras Khadka-led unit was in the hunt to chase down the UAE total even after being reduced to 56/5 – thanks to a 39-run partnership between Jora and Sompal Kami, it proved to be too little too late.

Earlier, in the last week, another Nepalese cricketer – Rohit Paudel – had a moment to cherish as he broke Sachin Tendulkar’s record to become the youngest male player to score a fifty in international cricket. Rohit, aged 16 years and 146 days, scored 55 off 58 balls as Nepal scored 242/9 and beat UAE by 145 runs. 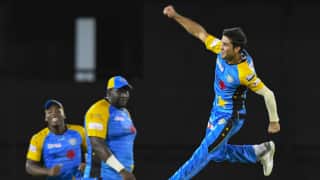