Wadia made it clear that he does not want advocate the idea of foreign teams playing in IPL.

Mumbai: The Working Group set up to look into the implementation of the findings of Lodha Committee report on IPL spot-fixing scandal met representatives of Mumbai Indians (MI) and Kings XI Punjab (KXIP) co-owner Ness Wadia, who stated that he is not in favour of inviting foreign teams to fill the void. IPL chairman and member of Working Group Rajeev Shukla said that all the franchises have spoken in favpur of eight-team tournament. Today the working group completed meeting all six franchises as the two suspended franchises Chennai Super Kings (CSK) and Rajasthan Royals (RR) were not invited for discussions. “After the Lodha Committee report, we are looking at how the IPL is being continued. We are taking advice from all the stakeholders. We had two meetings in Delhi and today we had one in Mumbai where we met the remaining franchises of MI, KXIP and Sunrisers Hyderabad [SRH]. Besides, we met [representatives of] both the broadcasters Sony and Star, sponsors CEAT,” Shukla told reporters after the meeting.

Wadia told reporters that “Perception of league should change and this is a massive opportunity for the turnaround. I also want stability as key investor. So many uncertainties are there.” Wadia also made it clear that he does not want advocate the idea of foreign teams playing in IPL. “I am not in favour of inviting two foreign teams to fill in the gap. Why will someone come to see a foreign team play?” Eddie Leie claims he would pay money to play in IPL

Shukla on his part said that every stakeholders’ suggestion is important. “We spoke to all of them about what to do after the Lodha Committee suspended two teams for two years. We made it clear that the Lodha Committee report will be implemented in toto. Instead of these teams, what will we do, whether other two teams will be brought in or not and how. All these we discussed with the franchises,” he said. “They gave their views, they gave good advice. We will collect all these advice together, discussed among us [Working Group] and prepare a report. We have been given six-week time till August 31 and we will submit the report within the stipulated time,” he added. Spot-fixing in IPL: Petition seeking players’ names to be heard by the Supreme Court

Asked if there was any consensus coming out so far, he said, “It is very difficult to divulge the proceedings of these meetings. One thing I want to say is that most of them [stakeholders] said they want at least eight teams in the IPL. They don’t want six teams. This is what most of the people have suggested.” IPL spot-fixing controversy: Supreme Court dismisses CAB plea of revealing player’s name

Shukla further said,”We have taken the advice but we will take a decision. The report will be sent to the IPL GC,” he said, adding that the Working Group may submit the report before deadline also. “We have met all the franchises, including Vijay Mallya. We are now left with meeting with Pepsi and Vodafone. We will meet them in Delhi on Monday and Tuesday,” said Shukla. Delhi Daredevils, Royal Challengers Bangalore owners stress on 8-team IPL formatAsked if termination of CSK and RR was an option still, he said,”We discussed several issues but there was not much discussion on that [about termination]. There is a legal ramification on that and it was not recommended by Lodha Committee report also.”Asked about any probable date of IPL GC meeting, he said, “The IPL GC may meet on August 29 but the venue will be decided after consultation with the BCCI President.”

Harsh Goenka of RPG met the Working Group as one of the IPL sponsors. Ness Wadia and Preity Zinta gave their views for KXIP while Nikhil Meswani represented MI. Meanwhile, a CSK fan group submitted a petition to Shukla to save the franchise from termination. Younis Khan: Rahul Dravd helped me develop into a top batsman 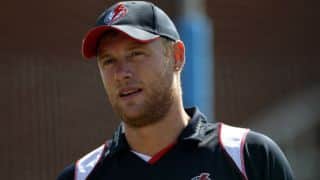