Netherlands beat Ireland for the second time in as many matches in the Tri-Nation T20 International series, at Hazelaarweg, Rotterdam. The win was set up by former South African all-rounder Roelof van der Merwe, who first dismissed Simi Singh and Kevin O’Brien for 24, then slammed a 26-ball 37 to take Netherlands home with an over to spare.

In response, Tobias Visee and Max O’Dowd added 37 for the opening stand in 23 balls. The runs kept coming, and at one stage Netherlands required 46 in 42 balls. But the Irish bowlers did not let Netherlands get away, dismissing van der Merwe bringing the equation to 23 in 18. They needed 13 in 2 overs when Stirling got Sikander Zulfiqar caught at long-off.

Then, with 8 needed from 8 balls, Dutch wicketkeeper Scott Edwards slashed at two short-pitched balls, both of which went for fours. 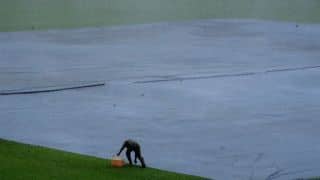