Using a mix of pace and wily orthodox slow bowling, Netherlands’ attack of Brandon Glover (three for 24), Roelof van der Merwe (two for 15) and Timm van der Gugten (two for 18) undid PNG’s batsmen, never allowing them to up the run rate aside from a final over blitz from Jason Kila (27 not out).

Lega Siaka scored 36 but their effort of 128 for eight from 20 overs never looked enough and so it proved when the Dutch batsmen arrived at the crease. Ben Cooper (41) settled any nerves there may have been with a 33-ball knock of 41, including four fours and two sixes, before Colin Ackermann and Ryan ten Doeschate saw the team home with seven wickets and an over to spare. Netherlands ended on a score of 134 for three from 19 overs as PNG finished second.

“I’m very pleased and very proud of this team. Before we came here we struggled a little bit in Oman and there were a lot of it words said about it but I think we’ve come here and produced some very good cricket,” Netherlands captain Pieter Seelaar said.

“The last two times we shared the trophy with Ireland and Scotland and I think deservedly now we’re holding the trophy by ourselves. The way Ben [Cooper] batted at the start was very handy and then having Colin [Ackermann] and Tendo [Ryan ten Doeschate] in that period where it was a little bit tougher meant experience came into it and they played very well.

“We have to make sure that in a years’ time we’re very well prepared, there will be a few challenges along the way but I think with the team we’ve got we should be very well placed.”

“The way [Colin] Ackermann and [Ryan] ten Doeschate played, they showed us to bat and it’s something we can learn from. Our batting wasn’t up to scratch at this level in the final few games and we’ve got to do a lot to work to get it where we want to be.”

Earlier, Ireland claimed third place with a 27-run win over Namibia, as their bowlers defended a modest total brilliantly. JJ Smith (three for 19) and Craig Williams (three for 34) claimed three wickets apiece as Ireland’s batsmen struggled, only Andy Balbirnie’s 46 registering as a score of any substance.

However, the spin of Simi Singh (three for 25) and Gareth Delany (two for 23) put the breaks on the Namibian chase and, despite Gerhard Erasmus’ resistance, Nambia fell to 108 all out in 18.2 overs to finish fourth.

In the final standings of the 14-team tournament, Scotland were in fifth place while Oman claimed the final ICC Men’s T20 World Cup 2020 qualification spot in sixth place. As a result of the final tournament standings, the first round groupings for the ICC Men’s T20 World Cup 2020 are now confirmed with PNG, Ireland and Oman in Group A with Sri Lanka. Group B will see the Netherlands, Namibia and Scotland join Bangladesh. 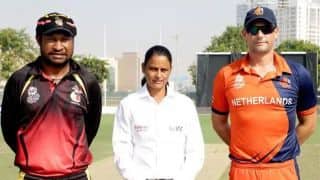