Netherlands will face Scotland in the final of the ICC World T20 Qualifiers 2015.

Ireland and Netherlands were engaged in a high-intensity, albeit low-scoring clash at Dublin in bid to seal a spot in the final of the ICC World T20 Qualifier. Netherlands finally held their nerve best in the death stages and emerged victorious. Chasing 129 under tricky conditions, Netherlands received a set back in the very first over when Stephan Myburgh was done in by Craig Young’s extra bounce and chopped on. Wickets kept on coming at regular intervals for Ireland, which enabled them to keep the match in balance despite having a small score to defend.

Ben Cooper looked like the man who would be the difference between the two sides as he scored steadily and at a decent rate, but just when it looked like he would take the men in orange to a comprehensive victory, he mistimed a full toss to lose his wicket for a crucial 40-ball 43. UPDATES: Ireland vs Netherlands ICC World T20 2015 Semi-Final

Michael Swart supported him well with a 20-bal 21 before becoming Kevin O’Brien‘s second victim. However, skipper Peter Borren was not one to throw in the towel at that stage. He shouldered the responsibility an scored at a decent rate. Max O’Dowd supported him with a 12-ball 17 before O’Brien struck a third time.

But that wicket was probably inconsequential since by then the Dutchmen needed to score a lesser than six runs per over. Borren was accompanied by Roelof van der Merwe and together they took Netherlands to victory without further casualties.

Earlier Ireland’s innings was over one ball before the full quota of 20 overs with all batsmen getting out. Ireland didn’t really get to put on a big partnership at any stage as the Dutch bowlers kept striking at regular intervals. Mudassar Bukhari was the pick of the bowlers, taking four wickets for 28 runs. 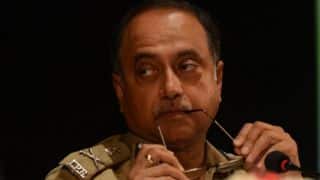