Captain Virat Kohli and vice-captain Rohit Sharma scored centuries to help India gun down a challenging target of 323 set by West Indies with 47 balls to spare.

India couldn t have hoped for a better start to the tournament having registered a comfortable eight-wicket win against the West Indies in the series opener at Guwahati. Captain Virat Kohli and vice-captain Rohit Sharma scored centuries to help India gun down a challenging target of 323 set by West Indies with 47 balls to spare. West Indies were buoyed by a century from Shimron Hetmyer and fifty from opener Kieran Powell. But in the end, it wasn t enough as Rohit and Kohli put on 246 runs for the second wicket to put India on course.

“Feels pretty good. Very convincing win for us. Windies put up a really good total. 320 targets are very tricky, but we knew we could do it with a big partnership,” Kohli, named Player of the Match, said during the post-match presentation ceremony.

The massive stand was the fifth century-plus stand between the two batsmen, during which Kohli brought up 36th ODI century and Rohit his 20th. It was also India s highest partnership for any wicket batting second. In contrast to the usual sight of Rohit being the aggressor of the two, it was Kohli who scored at a better rate that his partner on Sunday.

“It’s never too difficult when you have Rohit at the other end. Among the top three, I mostly take the anchor role because both Rohit and Shikhar are good stroke-makers,” Kohli said. “It was one of those days where I felt good and I told Rohit I will continue to bat this way positively and maybe you can play the anchor role. When Rayudu came he took that role and Rohit took over from me. I think that’s what ODI batting is all about. It’s about communication and batting in partnerships. It’s our 5th or 6th double-century partnership, it’s a pleasure to bat with him.”

During his knock of 140, Kohli crossed 2000 runs in a calendar year. This is the fifth time he has achieved the milestone in his career drawing level with Sachin Tendulkar and Mahela Jayawardene at second spot. He is now just 81 runs short of becoming the fifth Indian batsman to score 10000 runs in one-day internationals. The rate at which he is going, Kohli looks certain to break Tendulkar s tally of 49 ODI centuries.

“When we are batting like that, it’s good fun out there and we know the team will benefit from it as well. I have few years left in my career to enjoy this sport. Playing for the country is a matter of pride and a huge honour. You can’t afford to take any game lightly,” Kohli added. “You got to be honest to the sport and that is when the sport gives you back. I try to do that. That’s my basic thinking, because you are playing for India and not everyone gets to do.”

India conceded over 300 runs with the three pacers Umesh Yadav, Khaleel Ahmed and Mohammed Shami going for over 200 runs for three wickets, and the Indian skipper admitted that India s ground fielding could have been better.

“It’s difficult to contain when a side like Windies bats like that. I don’t want to be too harsh on the bowlers, but yes, we could have applied a bit better and bowled better in the last few overs. That is something to learn for us,” Kohli said. 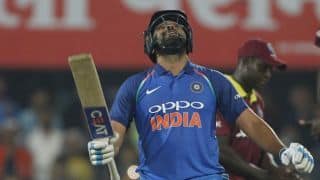