Yasir admitted that heading into the match he had thought of picking up a match haul of 10 wickets.

Pakistan beat New Zealand by an innings and 16 runs
Man of the Match: Yasir Shah

Pakistan legspinner Yasir Shah made headlines on Monday when he became the first bowler since former India legspinner Anil Kumble to take 10 wickets in a day. Yasir bamboozled New Zealand in their first innings, picking up 8 for 41 to bowl them out for 90 and went on to take two more wickets in the second dig to complete 10 in the match.

Speaking to the media after the close of play, Yasir admitted that heading into the match he had thought of picking up a match haul of 10 wickets but getting them all in one day was something he could have never imagined.

“When I came [here] in the morning, I was thinking that I had to take 10 wickets in the match,” Yasir said. “I didn’t know that I would end up taking 10 wickets in a day. Now, I will try to help the team get those eight [second-innings] wickets as quickly as we can.”

Yasir ran through the New Zealand middle order, bowling a triple-wicket maiden. In the penultimate over of the first session, the legspinner took out Tom Latham, Ross Taylor and Henry Nicholls. New Zealand were eventually bowled out inside 40 overs, handing Pakistan a lead of 328 runs. Later, in the second innings, Yasir removed Jeet Raval and completed his 10 when he had Kane Williamson at the stroke of stumps.

“Of course, I had a plan for each batsman, because every batsman has got their own weakness and strengths,” he said. “Against Australia, I was getting my rhythm back slowly because I was just coming back from injury. You need time to get your rhythm after an injury. Today, I bowled really well. I had worked hard in training. I think that’s one of the reasons. I bowled well in the last Test as well.”

Yasir’s figures of 8 for 41 was also the third best by a Pakistan bowler in Test cricket behind Abdul Qadir and Sarfraz Nawaz. He also completed 100 wickets in the UAE.

“Sometimes you do feel the pressure here because spinners get more wickets. So everyone expects you to take wickets. So you need to work even harder,” he says. “It happens in cricket [having very successful days]. It’s part of the game. Sometimes you don’t get wickets even when you bowl well. Sometimes obviously you don’t bowl too well, but you get to learn from that.” 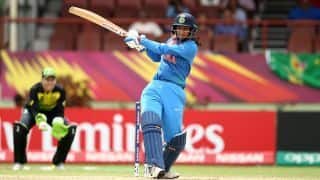 Will look to cement my place in Mumbai Ranji squad in absence of Prithvi Shaw and Shreyas Iyer: Armaan Jaffer