Australia tour of UAE 2014: New playing conditions to be implemented from this series

Australia tour of UAE 2014: New playing conditions to be implemented from this series

A T20I innings has been increased from 80 minutes to 85 minutes.

The new playing conditions for Tests, one-day Internationals (ODIs) and Twenty20 Internationals (T20Is) will come into effect with the series between Pakistan and Australia, which will start from the upcoming Pakistan- Australia series. The game of cricket has witnessed a sea change since the inception of the International Cricket Council (ICC) in 1909 – then the Imperial Cricket Conference – and even now the international body is working hard to make the game more viewer friendly and in sync with the modern sports fan.

One of the many amendments that were agreed upon by the ICC members was the induction of Real-time ‘snickometer’ in the list of approved technology. The trial regulation of the Decision Review System, allowing an 80-over top-up of unsuccessful DRS player reviews has been extended for another 12 months.

A playing condition has also been added to provide clarification on the ground movement/action of a player/player support personnel who has been suspended in accordance with the ICC Code of Conduct for Players and Player Support Personnel.

The player shall not be permitted to bowl in the match until he has either been able to field, or his team has subsequently been batting, for the total length of playing time for which he was absent (hereafter referred to as penance time), subject to a maximum cumulative penance time of 120 minutes.

If any unexpired penance time remains at the end of an innings, it is carried forward to the next and subsequent innings of the match. The player shall not be permitted to bat in the match until his team’s batting innings has been in progress for the length of playing time that is equal to stay on the ground.

However, once his side has lost five wickets in its batting innings, he may bat immediately. The ICC introduced a protocol last year that required the match umpires to consult with the match referee before making any decision to abandon play. This has now been formalised in, which has been further amended to deal with the effects of dew that has the potential to affect the contest, particularly in night T20s and day-night ODIs. A T20I innings has been increased from 80 minutes to 85 minutes and minimum over-rate to be achieved will be 14.11. 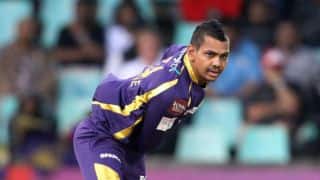