New South Wales Blues edged out Trinidad and Tobago in the Super Over following a tie to record their first win in two matches of the Champions League T20 tournament, here Wednesday. 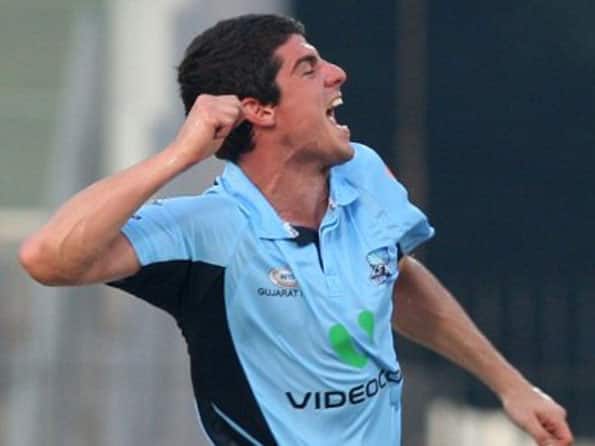 New South Wales Blues edged out Trinidad and Tobago in the Super Over following a tie to record their first win in two matches of the Champions League T20 tournament, here Wednesday.

Batting first, Trinidad and Tobago managed 139 for six in their 20 overs while Blues, courtesy a 16-run final over, responded with 139 for eight to tie the match. In the Super Over, the Blues plundered 18 runs as against 15 by Trinidad and Tobago who thus slid to their second defeat in as many matches.

Trinidad had the game seemingly in their control when they had the Blues on the ropes, but a late blitz by the tail-enders took the game away from them.

An early flurry of boundaries seemed to set up the Blues innings with openers Shane Watson and David Warner getting a move on.

However, leg-spinner Sunil Narine struck a telling blow by having Watson caught in the deep with the batsman top-edging a pull. His departure saw the islanders gradually move into a strong position.

With the ball keeping low, the situation demanded sensible batting, but Warner and then Daniel Smith fell attempting the cut shot against off-spinner Sherwin Ganga to be bowled as the Blues slid to 72 for three.

Ganga struck again as Steven Smith committed hara-kiri with a head-in-the-air shot and skied a catch for Simmons to take and Blues slid deeper into trouble with Ben Rohrer too departing soon after.

It left Blues to get 37 to get in the last three overs with skipper Simon Katich still at the crease. But the captain failed to deliver as he fell victim to seamer Ravi Rampaul’s guiles in the 18th over.

Another couple of wickets left Blues to get 17 off the final over bowled by Rampaul. The ninth wicket pair of Moises Henriques and young Pat Cummins took 16 aided by three boundaries to push the match into the Super Over.

Taking first strike, the Blues made 18 for none with Henriques smashing Rampaul for four boundaries and a hard run two.

In reply, Trinidad’s Barath and Simmons made a brave bid, but eventually fell short, as the duo managed only 16 with the latter getting out off the final ball bowled by spinner Stephen O’Keefe.

Earlier, the Trinidad and Tobago innings never quite had the momentum for a bigger score and it was only towards the fag end that they managed to pick up some useful runs with 14 runs coming in the 19th over bowled by Starc who thus undid all the earlier good work by his mates.

In fact, left-arm spinner O’Keefe was the pick of the Blues bowlers, conceding just 14 runs in his four overs while breaking a promising opening partnership between Lendl Simmons (42) and Adrian Barath (15) who had put on 41 in 6.3 overs.

Thereafter, none of the Trinidad and Tobago batsmen were able to collar the bowling that at best was restrictive, but forced errors from an increasingly impatient willow-wielders leading to regular fall of wickets with seamer Moises Henriques picking up two during a tight spell.

However, some lusty hitting at the death by Rampaul and Cooper lent some respectability to the innings, but it put onus on the Caribbean fielding and bowling that needed to be spot on.(IANS)

Man of the Match: Moises Henriques