Construction work will begin at Victoria Falls early next year on what promises to be a spectacular new Zimbabwe Test and ODI cricket ground after the local council granted planning approval. It will be the third Test arena in the country after Harare Sports Club and Queens Sports Club in Bulawayo. 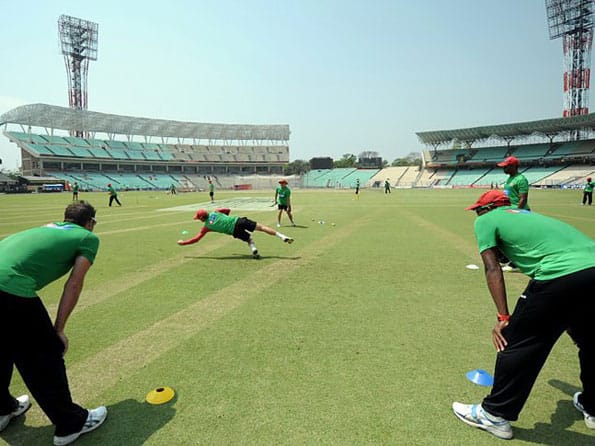 Construction work will begin at Victoria Falls early next year on what promises to be a spectacular new Zimbabwe Test and ODI cricket ground after the local council granted planning approval.

It will be the third Test arena in the country after Harare Sports Club and Queens Sports Club in Bulawayo.

These are due to stage matches against Bangladesh in August, including one Test in Harare, following Zimbabwe’s return after six years absence to the game at top level.

The new ground is designed to attract additional local and international visitors on top of those already drawn to one of Africa’s premier tourist destinations.

It will also be a second home ground after Queens for the Matabeleland “Tuskers,” one of five first class provincial sides recently established into a first class league.

The new ground is to be sited close to the Gorges, deep ravines gouged through millions of years, which take massive volumes of water from the 100 metres high Falls down into Lake Kariba, formed in 1958 by a hyrdro-electric dam across the Zambezi River.

These are regarded by many white-water enthusiasts as providing among the best rafting in the world.

In addition to staging Tests and ODI’s, the expectation is that other cricket teams will be attracted, in particular English representative and county sides, who were occasional tourists in previous years.

Before Zimbabwe’s demise as a full member of the International Cricket Council (ICC) in 2005, these included MCC, Yorkshire and Northamptonshire.

“A” sides from Australia and South Africa are presently in Zimbabwe for a triangular tournament and more than one such match would be staged there from a similar tour three years from now.

Bvute commented: “This is one of the great natural wonders of the world and playing international and first class cricket there will cause a lot of excitement among potentially visiting players and fans. Tourism is on the up in this country and sporting tourism especially so.”

Campbell said: “We had eight or nine thousand for a recent Twenty-20 tournament in Harare and that has given us additional confidence to go ahead, apart from other factors. People now go to Dubai for cricket. We will soon be an alternative to that. There is a lot of vision here at the moment.”

Bvute claims there will be facilities for 12,000 spectators while Campbell opts for a lower figure of 4,000.

Architects are drawing up plans for a clubhouse, but no cost estimates are so far available.

The Victoria Falls are directly opposite the Zambia city of Livingstone, named after the 19th century Scottish explorer and missionary Dr. David Livingstone. And it is only a 90 minutes flight or so from Johannesburg, South Africa.

Livingstone and Victoria Falls are connected by a rail and road bridge which once formed part of diamond magnate Cecil John Rhodes’s vision of a link all the way from Cape Town to Cairo at opposite ends of the continent.

Bhopal to get a world-class stadium soon