New Zealand have announced their 13-member squad for the Australia tour later this month, where they will play two Tests. 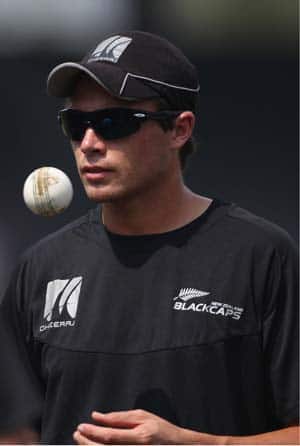 Tim Southee has recovered from the knee injury Getty Images

New Zealand have announced their 13-member squad for the Australia tour later this month, where they will play two Tests.

Trent Boult is the only uncapped player in the Kiwi squad. The Sportal reported that the 22-year-old pacer has been performing exceptionally well in the domestic circuit and can also hit the 140 kmph mark.

He has made a fine start to the New Zealand domestic season, taking 10 wickets including eight against Auckland in the opening round.

“It is pleasing to provide Trent with an opportunity. He is a promising young bowler and deserves his place in the squad after impressing at the NZC Fast Bowling Camp during the winter and making a strong start to the Plunket Shield,” said national selection manager Kim Littlejohn.

After missing the Zimbabwe tour, pacer Tim Southee and all-rounder Jesse Ryder – who sustained knee and calf injuries respectively – have regained full fitness and have returned to the national side.

“We were keen to show consistency in selection for the tour of Australia and retain the nucleus of the side that performed well against Zimbabwe,” Littlejohn said.

“In choosing our squad we decided to go with 13 players and will consider adding another seamer before the first Test. That will largely depend on how the players pull up after the warm-up match,” he added.

New Zealand will play their first Test in Brisbane on December 1, followed by the second in Hobart on December 9.