This is the first time two top-tier T20 domestic teams from different countries will play an exhibition game.

The trans-tasman rivalry is all set to add a new dimension to the contest. In a first in the world of T20 cricket a New Zealand domestic side Canterbury Kings will play host to Australia’s Sydney Thunder at the Hagley Oval. The exhibition match will serve as a practice game for both sides. Such a move is unheard of among cricket clubs. The only convergence of T20 clubs from more than one country previously was the now-defunct Champions League T20, but that was a tournament in itself rather than practice and/or exhibition games. ALSO READ: Mike Hesson admits Australia tour will be huge challenge for New Zealand

Lee Germon who was instrumental in getting permissions to transform the Hagley Oval into a international stadium in time for the ICC Cricket World Cup 2015, was upbeat about the move. “This is the first time an Australian side at this level has crossed the Tasman, the result of a growing relationship between Canterbury Cricket and Sydney Thunder that will enhance the development and preparation of both organisations,” Germon was quoted as saying by stuff.co.nz.

The iconic match is scheduled for December 4 at 4:30 pm local time. Canterbury Kings captain Ronnie Hira was positive about the initiative. “It’s very exciting that the Thunder are coming over to try to storm our castle, but we’ll be battle-hardened and ready for them,” said Canterbury Kings captain Ronnie Hira. “They’ve got some very talented players, guys who are great to watch. Their captain Mike Hussey is a living legend of cricket in Australia. Shane Watson and Aiden Blizzard spring straight to mind as well.” POLL: Would Sachin Tendulkar have been the best contemporary cricketer had he not retired? 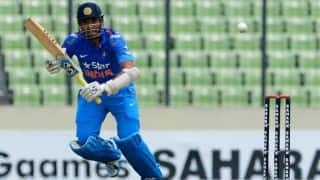 KPL 2015: Who will win Qualifier 1 between Belagavi Panthers and Bijapur Bulls?