New Zealand’s bowlers held the advantage on the first day of the first Test against South Africa at Kingsmeadon Friday. South Africa struggled to 236 for 8 at the close of play after deciding to bat in overcast conditions, with the floodlights on for most of the day. Left-arm opening bowler Trent Boult struck two telling blows, making the first breakthrough when he had Stephen Cook caught behind for 20, then dismissing top-scorer Hashim Amla for 53. Fellow left-arm seamer Neil Wagner finished the day with the best figures of three for 47, while left-arm spinner Mitchell Santner halted a promising fightback by South Africa when he dismissed Quinton de Kock and Temba Bavuma in the space of three balls. FULL CRICKET SCORECARD: South Africa vs New Zealand, 1st Test at Durban

Batting was never easy on a slow but well-grassed pitch, with Boult in particular getting the ball to swing and seam. Cook got a faint edge to a ball which straightened off the surface after several other deliveries had swung in to the right-hander. FULL CRICKET UPDATES: South Africa vs New Zealand, 1st Test at Durban

Amla, by contrast, was caught behind off an inside edge when a ball swung in to him. South African-educated Wagner used the short ball effectively, having JP Duminy caught at fine leg off an ill-judged pull shot.

Wagner then dismissed former schoolmate Faf du Plessis with the help of a spectacular diving catch at gully by New Zealand captain Kane Williamson. Du Plessis, standing in as South African captain for the injured AB de Villiers, made 23 in an 84-ball vigil.

Bavuma and De Kock both batted positively in adding 48 for the sixth wicket. De Kock made 33 runs off 33 balls before going down the wicket to try to hit Santner for a third successive boundary, lofting a catch to wide mid-off. Two balls later Bavuma missed a sweep against Santner and was leg before wicket for 46.

Doug Bracewell, who replaced leg-spinner Ish Sodhi in the only change from the New Zealand team that won two Test matches against Zimbabwe in Bulawayo recently, took the other wicket when he had opener Dean Elgar caught at second slip. 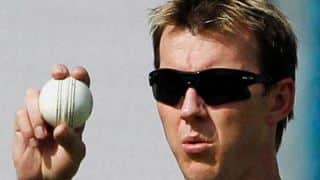 Pakistan vs England: Misbah-ul-Haq a 'father-figure' to his teammates, says Nasser Hussain