During the third Twenty20 in Wellington last Friday, ground announcer Mark McLeod played the sound of a cash register.

Wellington: New Zealand Cricket has apologised to the touring Pakistan team after a ground announcer taunted paceman Mohammad Aamer by playing a cash register sound during a Twenty20 match.  The announcer has been censured and told it was “inappropriate and disrespectful” to goad the fast bowler on his return to international cricket after serving a five-year ban for spot-fixing. Aamer has also been subjected to abuse by spectators but New Zealand Cricket chief executive David White stopped short of asking fans to leave the 23-year-old alone. Aamer is on his first tour since serving a prison term and ban for his role in a 2010 spot-fixing scandal. FULL CRICKET SCORECARD: Pakistan vs New Zealand 2nd ODI at Napier

During the third Twenty20 in Wellington last Friday, ground announcer Mark McLeod played the sound of a cash register when Aamer was running in to bowl. “I think it was inappropriate and disrespectful, and has the effect of trivialising one of the biggest issues facing cricket at the moment,” White told Fairfax Media on Thursday.

“I’ve contacted the Pakistan team management to apologise, and to assure them there will be no repeat.”  On Monday, during the first one-day international between New Zealand and Pakistan, senior Pakistan player Mohammad Hafeez complained to the umpires about the treatment Aamer was receiving from spectators, according to Pakistan media reports. “Money was allegedly being waved at Aamer amid chants of “I’ve got a dollar for you”. Live cricket updates: Pakistan vs New Zealand 2015-16, 2nd ODI at Napier

But White differentiated between the actions of spectators and those of a ground announcer working for New Zealand Cricket. “We can’t direct people how to behave all the time,” he said.  “There’s a line of drunken disorderly abusive behaviour but stadiums are full of people in groups together, around the world there is banter. I guess there is the line that people need to stay within.”

New Zealad bowler Doug Bracewell described taunts from the crowd as a hazard of touring life, particularly when fielding on the boundary. “You’ve got to expect to get a bit of grief on the boundary at times. Especially touring, it’s never easy and you always cop a bit from the spectators. It’s never witty or smart, it’s usually straight to the point,” he said. The second ODI is scheduled to be played in Napier on Thursday although it was likely to be affected by heavy rain falling in the city. 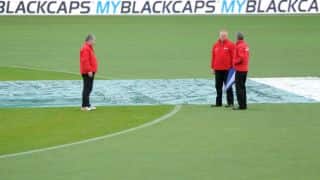 Pakistan vs New Zealand 2015-16, 2nd ODI at Napier abandoned due to rain